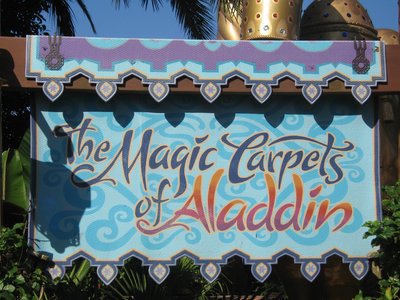 The Magic Carpets of Aladdin is an aerial carousel ride in the Adventureland area of Magic Kingdom. The attraction is very similar to the iconic Dumbo the Flying Elephant ride in Fantasyland, with vehicles attached to long arms that spin around a central axis. The ride is inspired by the 1992 Disney film Aladdin, the hero of which rides around on a carpet of his own. His magic carpet ride with the lovely Princess Jasmine is one of the most famous sequences from the film, and this attraction allows guests to take a magic carpet ride of their own.

The corner of Adventureland in which the Magic Carpets of Aladdin soar is decorated to resemble the marketplace of Agrabah, where the animated film is set. A golden camel squirts water at guests as they enter the queue for the ride. Rising from the center of the attraction is a pillar with the genie’s magic lamp sitting atop it.

While Aladdin’s magic carpet is just a rug – albeit a magical one – the carpets for riders at the Magic Kingdom attraction include bench style seats equipped with seat belts that can hold a total of four guests. That makes it a bit safer than the average magic rug ride around an Arabian city!

A Good Ride for Kids

Dumbo the Flying Elephant has always been a very popular ride for children, and the Magic Carpets of Aladdin has become quite popular as well. The ride is quite tame, but gives kids just enough of a thrill as they spin around. The ability to control the vehicles means younger children can have a very mild experience, while older children can fly high and rock back and forth.

The line is often shorter for the Magic Carpets than it is for Dumbo, partly because the ride does not have the same iconic status, and partly because the Magic Carpets can carry more guests. The double benches frequently allow whole families to ride together at once. There is not much about the ride that is likely to thrill adults on their own, but it is a good choice for adults chaperoning kids.

The Agrabah marketplace where the Magic Carpets of Aladdin spin is also home to regular character greetings. Aladdin, Princess Jasmine, the Genie, and other characters from the Disney film appear from time to time to greet guests and sign autographs. A Times Guide available at the entrance to the park will let you know when character appearances are scheduled at the Magic Carpets as well as elsewhere in the park.