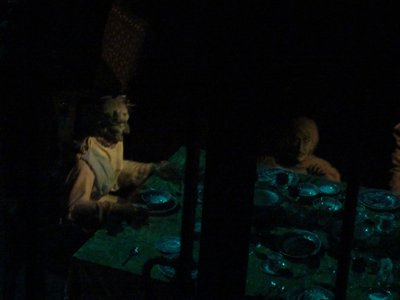 This is a spoiler alert – we will explore the simple but effective technology behind a few of the most dramatic effects that makes this Magic Kingdom attraction a “must see.”  This includes the Ballroom scene with dancing ghosts, the séance circle with a floating crystal ball, and the famous hitchhiking ghosts that “follow you home.”

The Ballroom – An Amazing Scene In The Mansion

During your ride through the Haunted Mansion you will come across a huge scene where dozens of ghosts mysteriously appear and disappear.  And it looks like it is quite a party.  These ghosts dance around a grand banquet hall.  At the same time, you see an appearing and disappearing organist at a grand pipe organ.  Ghosts appear and disappear as superimposed images over the life-sized paintings on the wall of the grand hall, and a few crazy ghosts party and have a great time hanging from the huge chandeliers.

Some people who visit the attraction say that the effect must be a hologram, since the images are very 3D and realistic, yet translucent – and they appear and disappear.  Or maybe there is some other high technology using lasers or high definition TV that makes this scene come alive.  But the reality is quite different.

Remember that the Haunted Mansion at Walt Disney World opened in 1971, before many of the technical tricks we know today ever exists.  And the Disney World mansion uses the same effect that was first used in the Disneyland Haunted Mansion, which opened in 1969.  So, the “technology” used to create this effect had to exist in the mid 1960s.  So high-tech is not the answer.  But what is?

You Can Thank Mr. Pepper

The actual technique used goes back much earlier than 1960s – much earlier.  It goes back to the mid 1800s and a type of projection system called phantasmagoria – which has been used by magicians and showmen for many years.  The particular effect used in the Haunted Mansion was originally developed by John Henry Pepper – a chemist who was also quite a showman himself in the 1800s.  In fact, Pepper’s scientific demonstrations were so popular that he took them on the road to show them off in Australia, Canada, and the United States.  His famous effect using the phantasmagoria system is now commonly called Pepper’s Ghost.  The installation in Disney Parks is the world’s largest use of the technique. It is very low tech but it is also wildly effective.

How Disney Did It

You look down from your ride vehicle into the elegant Haunted Mansion ballroom, all set up for a grand celebration.  What you don’t actually see, however, are gigantic panes of clear glass set at an angle in the ballroom.  When you see the ghosts, what you are actually seeing is the reflection of audio-animatronic figures which are directly beneath you.   You see, under your ride vehicle, or “doom buggy,” is a room that is painted black and has the ghostly figures – actual ‘mannequin’ like installations, complete with sheer clothing and real bodies that move and dance.  Most of the movement is from simple turntables.  As you look down into the ballroom, the glass reflects the image of the ghostly audio-animatronics that are below you.  As lights pointed onto the animatronic figures turn on and off, they illuminate or darken the figures – making them appear and disappear.

How You Can Recreate The Effect Yourself

You can see a simple illustration of the Pepper’s Ghost technique if you turn on the interior light of your car at night.  As you look into the windshield, you will see a reflection of yourself while you can still see the objects outside the care beyond the windshield.   The angled glass in your windshield is just like the angled glass – which is nearly impossible to detect – in the Haunted Mansion.

Your car enters a dark, circular room and starts to move around the outer edge of the room.  You see floating instruments – harps, drums, and horns floating around the outer edge, above and behind you.  As you look into the center of the room you see a floating crystal ball that, amazingly, has the head of a ghostly woman who is talking to you.  The effect is dramatic.  How does Disney achieve this special effect?  In the Haunted Mansion at the Magic Kingdom in Florida there is a projector inside the ball that broadcasts the image into the ball.  At Disneyland in California there is a projector that broadcasts onto the ball.

As you near the end of the ride in your Omnimover vehicle, you enter a scene that people always talk about when the mention Disney’s Haunted Mansion – the hitchhiking ghosts.  Your car turns to face a nearby wall with mirrors. You see yourself in the mirrors, but you also see a ghost sitting next to you (or in some cases on top of you).  Many people get a big smile when they see this and there is plenty of pointing.

How does Disney do this?  The mirrors you are looking at are two way mirrors.  A two way mirror is one where the glass is coated with or includes a material that is nearly translucent.  Normally it is a ver thin coating of aluminum.  When one side of the glass is brightly lit (like the side with the ghost, which has a bright light projected onto it) but the other side is dark (like the side where you are sitting in your “Doom Buggy”), you can see from the dark side to the lighter side.  The ghosts are behind the mirror, moving along at the same speed as your ride vehicle.

A Little Scary, A Lot Of Fun

The Haunted Mansion is just a little bit scary – it is dark and spooky.  But there is no gore or blood.  Kids and adults of all ages will enjoy the grim grinning ghosts.