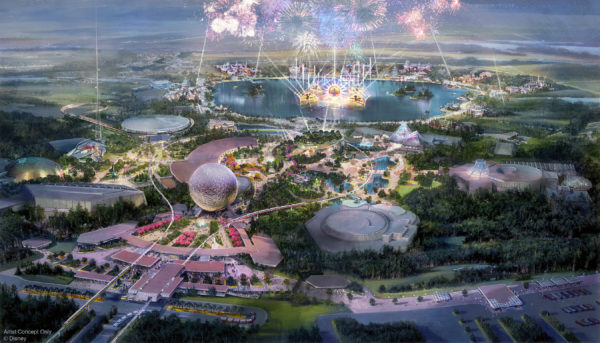 Epcot at Walt Disney World Resort in Florida is undergoing a historic transformation, bringing the next generation of immersive storytelling to life through a plethora of new attractions and experiences. Epcot will be unified with four neighborhoods that take guests to new destinations where the real is made fantastic in a celebration of curiosity, hands-on wonder and the magic of possibility. (Disney)

In May, Disney announced that it would reduce capital expenditures by $900 million in its fiscal year 2020.  Based on that announcement, we knew that many projects would be rescheduled, delayed, or possibly even canceled.

Today, sources are reporting some of the specifics of what these cuts will mean to EPCOT.

During the 2019 D23 convention, Disney announced plans for an attraction in the UK Pavilion based on Mary Poppins.  We never learned exactly what type of attraction might be in the works – a full-on dark ride, or a simple spinner, for example.

Now, Disney officials have said that the attraction is postponed.

Disney has removed the Mary Poppins preview section from the EPCOT Experience attraction in the Odyssey building.

Disney will continue to work on the new neighborhood/land called World Celebration, but will take a different approach to the previously announced festival location.

While Disney did not make an official announcement on what “a different approach” means specifically, it could be that Disney will postpone or scale back the new Festival Center building, which was planned as a three-level structure with a plaza level, an expo level, and a “park in the sky” on the top.

Before the Coronavirus, Disney had intended to close Spaceship Earth in May for a significant facelift.  The attraction reopened today with the park in its pre-shutdown condition and will continue to operate that way for the time being.