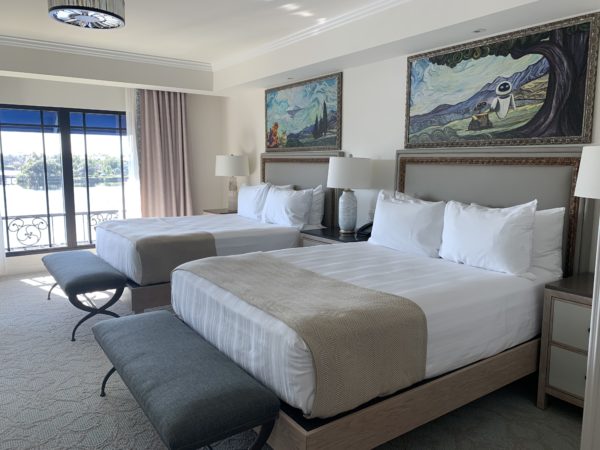 Disney’s Riviera Resort is a brand-new Disney Vacation Club property in Walt Disney World! This resort provides one and two-bedroom rooms plus grand villas and a brand new room style, the Tower Studios.

Let’s take a look inside two of the room categories at Disney’s Riviera Resort, courtesy of the nice folks at Disney Media Relations!

The Tower Studios are a brand-new category of accommodations for Disney Resort Hotels and specifically Disney Vacation Club. These rooms, while very small, sleep two adults comfortably and can fit a pack and play for an infant.

Watch this video for a tour of the Tower Studios!

As you can see in the video, the Studios have a couch by day and a bed by night.

These perfectly-sized studios use space in very smart ways!

These quaint and comfy Tower Studios are reminiscent of accommodations in the European Riviera. In Disney World, they face the Italy Pavilion in Epcot’s World Showcase – a nod to their inspiration – and provide a great view of the Epcot fireworks show.

The Grand Villas sleep up to twelve adults in a luxury apartment. They are exquisitely appointed!

When you walk into the villa, you walk into a great room with a living area and kitchen and just to the left, a formal dining room.

When you walk through the kitchen to the right, you’ll find two bedrooms with two queen-size beds each and each with their own bathroom.

The master bedroom, which can be seen in the video below, features a king-size bed, a private balcony, a large closet, and a large, modern bathroom with a massive marble shower and a luxurious soaking tub.

One and Two Bedroom Rooms