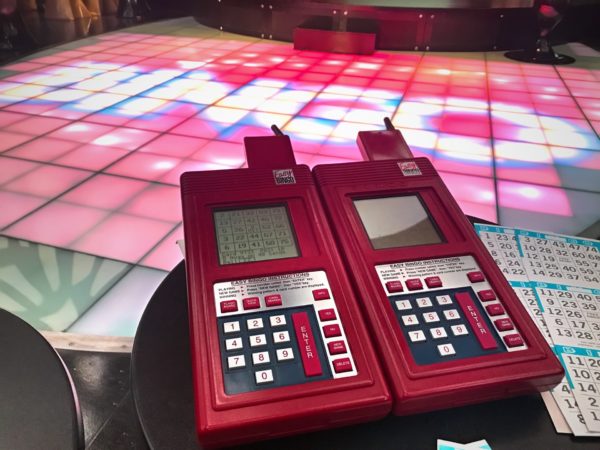 Disney Cruise Line Bingo: More Fun Than You Might Expect

You might find yourself wondering what activities there are to do aboard a Disney Cruise besides, well, cruising.

There are, in fact, a lot of activities, and Cruise Line Bingo is one that is actually more fun than you might expect!

While aboard the Disney Dream, compliments of the nice folks at Disney Media Relations, I got to play Cruise Line Bingo!  I paid for the bingo cards myself and didn’t win any money (so sad, but not unexpected), but I still had a great time.

The bingo caller, on this cruise Timmy, is the master of ceremonies.  He is accompanied by a handful of other Cast Members who help answer questions, check bingo cards for wins, etc.

Timmy kept everything moving along and made the game lots of fun.  This is not your grandma’s bingo.

If you don’t believe me that it’s more fun than you might expect, check out the B11 dance video!  The Bingo crew does this little ditty every time they call the number B11.  Why?  Because its fun!

When you enter the bingo room you select a package of bingo cards.

You can rent a red electronic machine preloaded with multiple cards.  The machine checks the called numbers automatically and perfectly monitors more cards than you could monitor yourself.  This may sound like it defeats the purpose of playing bingo (marking off the numbers you hear), but it is fun to see the machine keep track of the calls – especially as you get closer and closer to bingo.

Most packages include traditional paper bingo.  If you rent an electronic bingo machine, you will likely get a few bonus paper bingo cards as well.

When the caller reads a number, you can either push out the perforated number on the paper card or color it in with a marker.  Don’t rip the number off completely – that will void the card.

Sometimes they play special games. On this night, we played an X game in honor of pirate night!  Arrr….

Timmy the host confirms bingos digitally to make sure they are valid!  A helper reads the serial number for the player’s card, and the bingo machine validates the win electronically.

While there aren’t any casinos onboard the Disney Cruise Ships, you can win real money at Bingo!  However, make sure you call Bingo before the bingo caller moves on to the next number, or you won’t win. If you don’t call bing on the winning number, you have a “Bongo” – meaning no money!

Here are some questions and answers you might want to keep in mind if you plan to play bingo during your cruise:

Question: Are the sessions crowded?

Answer: Most sessions are well attended, but I’ve never been to a session that was completely sold out or felt too overcrowded.  Most sessions seem to take place in the Evolution Lounge in The District section of the ship on deck 4 aft.  The last session of the cruise is often the most popular and well attended.  It will likely take place in the Buena Vista Theater on deck 5.  Check your Navigator paper guide or smartphone app for details on times and locations.  Plan to show up a few minutes early, since you may need to wait in line, and you will need time to select and purchase a package of bingo cards.

Question: How much can you win?

Answer: The big prize jackpot seems to range from $5,000 to $10,000 and grows larger through the duration of the cruise.  However, many of these jackpots will not be given away.  For example, I played when there was a $5,000 jackpot available, but in order to win it, someone had to cover all their entire bingo board (25 slots) in less than 46 calls (I think those numbers are right).  Nobody accomplished a bingo in 46 calls, so the host did not give away the $5,000.  On a prior cruise the $10,000 prize jackpot was guaranteed during the last game, so someone did win that money – big money!   Otherwise, the prizes were several hundred dollars per game and were sometimes split between more two or three winners.

Question: Does the game move quickly?

Answer: Yes it does. The host calls a new number every 10 seconds, so things move along and you need to pay attention to all your cards or you might miss marking off numbers on your cards.

Question:  Is there a casino or other gambling on a Disney Cruise?

Answer: Nope.  Disney Cruise Line ships do not have casinos.  I suspect that would not be in line with Disney’s family-friendly image.  Casinos are big moneymakers, so it may be a factor why Disney cruises are more expensive than other cruise lines.  However, you can win real money playing Disney bingo, so technically, I think this is a type of gambling.

Question:  Can kids play bingo on the Disney Cruise Line?

Answer: Yes, but they must be accompanied by an adult to win the money.

Question: Is the bingo called electronically?

Answer: During my cruise, the game was called by hosted by a live Disney Cast Member.  He used a machine that electronically selected the numbers and displayed them on screens in the front of the room.  There were no more round balls tumbling around. On the Disney Cruise Line, the bingo machine has a name: Bingo Betty.  If you don’t like the numbers being called, you are encouraged to shout out “Shake it up, Betty!”

Answer: Normal bingo may be slow-moving and boring, but bingo on the Disney Cruise line is fun!  The game moves quickly, the host makes fun (Disney appropriate) jokes and banters with his fellow Cast Members, and you need to pay attention to keep up with the pace of the game.  Statistically, you probably won’t walk away winning money.  You will probably come out a bit poorer than when you walked in after paying for bingo cards and a drink or two (if you want a drink or two).  However, you might just be surprised by the amount of entertainment you get with those bingo cards.  And who knows, you just might walk out with a few hundred – or even a few thousand – extra dollars in your pocket!

Have you played Bingo on Disney Cruise Line ships?  Fun?