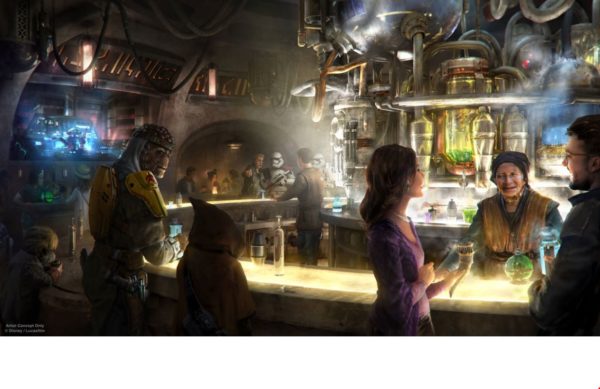 We’ve been waiting for a long time for Star Wars: Galaxy’s Edge to open in both Disneyland and Disney’s Hollywood Studios. By the time the lands open in summer and fall, respectively, in 2019, we’ll have been waiting a full four years from the time Disney announced it, and suspicion has been lingering even longer.

Disney is slowly releasing details, and is giving us some teaser information about the much-anticipated cantina that will be part of Galaxy’s Edge on both coasts.

Oga’s Cantina will, according to Disney, welcome “pilots, bounty hunters, smugglers, locals, and galactic travelers alike”. It will have a very similar vibe to the colorful cantina in the movies. Disney also describes the cantina as a “notorious watering hole” where you will encounter all kinds of business deals and characters.

As the name suggests, the cantina is run by an “intriguing alien proprietor, Oga Garra” who enforces a strict code of conduct. Joining her will be Rex (RX-24), the original droid from Star Tours, who will provide the musical entertainment.

The menu promises to bring “the best drinks in the galaxy” served in “unique vessels”. You can expect food and drinks to include exotic ingredients using otherworldly methods. The cantina will serve alcohol on both coasts too, which will make this the first time that Disneyland will serve alcohol and will continue the trend on the east coast. Final details about actual menu items haven’t been announced, but I will follow up on this as soon as details are available!