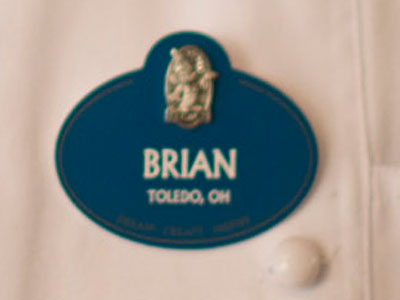 Every Cast Member at Disney World wears a name tag. If you have been to Disney World, you have probably seen hundreds of them. They have changed over the years, with different styles, graphics, and type faces. But typically they are a white oval shape with the Cast Member’s first name and their home town.

But a few Cast Members get a different name tag; one that is blue instead of white.

What is the difference?

A blue name tag means that the Cast Member has earned a Walt Disney Legacy Award. This award recognizes Cast Members who do an exceptional job in three areas: dream, create, inspire.

To get the award, a fellow Cast Member needs to nominate another Cast Member. The process is very selective. The latest class of award recipients included just 350 Cast Members to receive the award and the special blue name tag. That’s out of a total of about 65,000 total Cast Members who work at the Resort.

A panel that includes executives, managers, and fellow Cast Members reviews the nominations and selects the winners. This is part of a unified recognition program that covers employees in all the theme parks plus Imagineering and the Disney Cruise Lines.

Disney Cast Members often work with plenty of grumpy people, put in long hours, and get little pay. But they are the folks who are key to creating magical experiences for families from all over the world who visit the Walt Disney World Resort. So if you happen to come across a Cast Member who has one of the few, special blue name tags that shows they won this special award, be sure to congratulate them.

Has a Cast Member ever gone ‘above and beyond’ for you?