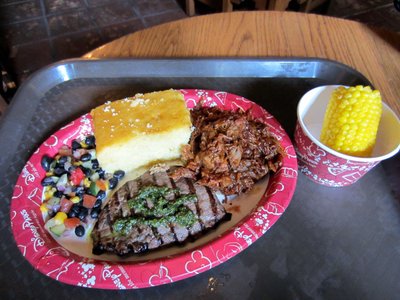 Would You Buy A Steak At Pecos Bills?

The other day I decided to visit Pecos Bills in Frontierland at the Magic Kingdom. It is one of my favorite Quick Service Restaurants. Anyone who is a fan of Disney World dining probably enjoys Pecos Bills –it has great theming it is normally quite busy. It also has the bonus of the toppings bar where you can load up on things like lettuce, grilled onions, mushrooms, and the perennial favorite melted cheese. These are all great toppings that you can layer on the traditional food that Pecos bills serves – which includes hamburgers and taco salads.

Steak In A Quick Service Location?

My visit the Pecos Bills was not a typical one. I noticed signs in front of each cash register advertising a steak and pork dinner. For $14.49 the sign promised a piece of steak together with pulled pork, served with your choice of corn on the cob, apple slices, and French fries. The picture also showed a piece of cornbread and a black bean salad. 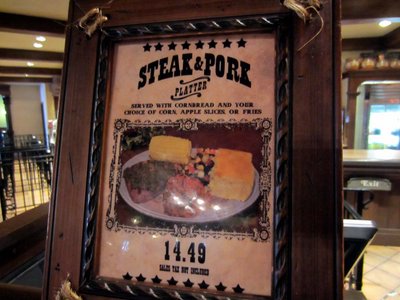 The sign at the register made a tempting offer.

I actually had my mind set on ordering a taco salad – my favorite at this location. What is not to love about being able to build your own taco salad with plenty of toppings from the top in bar (with unlimited melted cheese at the top of the list)? However, this offer did catch my eye.

I asked the Cast Member at the register if this offer of steak and pork was something new. He said that it was new, and had been offered for the past few months. It was in a testing phase. He also added that this special meal was only available at dinnertime.

By the way, he also mentioned that last year Disney had tested a chicken meal at Pecos Bills for a few months during the busy summer season. He said that test apparently didn’t go well since the chicken dinner did not come back.

So now that I knew that this was a test, couldn’t resist. I decided to forsake my longtime favorite of the taco salad and put in my order for the steak and pork. I did pause a bit, however. I am no foodie, but I do know that cheap steak normally isn’t very good steak.  For less than $15.00, I knew I would not be getting the quality of the meat you might find at Le Celler in Epcot‘s Canada Pavilion.

When I received my meal I was pleasantly surprised.

The meal included generous portions and a great sauce.

The black bean salad was served cold, and had small bits of vegetables – I think they were tomatoes and peppers. As I would have expected with a cold salad, it seems that everything was cooked and was not crunchy – but that was good news to me.

The corn on the cob was about what I would have expected from a quick service dining location. It seems as if the corn may have been swimming in water for some time before it was served since it was not especially crispy. However, the taste was good and I did enjoy the corn.

And all this leads me to the steak. While the Cast Member did not ask me how I wanted the steak prepared when I placed my order, I would say that the steak was done medium well – just a bit pink inside. I was able to easily cut it using the plastic knife and fork that are the standard at Pecos Bills. The quality of the meat was decent – about what I would have expected.

However, the unexpected pleasure in this meal was the Chimmi Churri sauce that was on top of a steak. I myself didn’t know what the sauce was, so I had to ask one of the Cast Members. A Chimmi Churri sauce is like a pesto sauce. It is typically made from ingredients like basil, garlic, and vinegar. In a word, that sauce was delicious and was definitely a high point in the meal.

Overall I was pleased that I took a leap of faith and decided to order this new and beef and pork offering at Pecos Bills. The quality of the steak was about on par with what I expected. The other parts of the meal – especially the pork, cornbread, and bean salad – were very good. And the Chimmi Churri sauce was  excellent.

I hope that this meal performs well on tests and that you get an opportunity to try it the next time you are in Frontierland and wander into Pecos Bills.