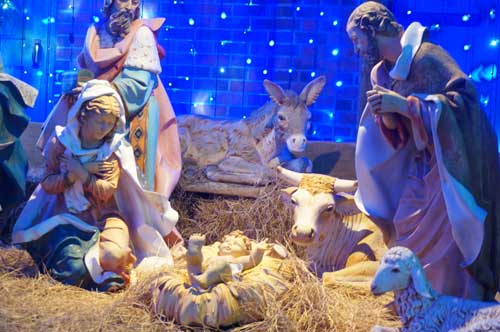 Hi everyone, this is Herb Leibacher from World of Walt, and today I don’t have a standard web site post / podcast show, but rather my 2015 Christmas Card to you

Let me begin by saying that, even though it is over for this year, to my friends who celebrate the re-dedication of the Jewish template, I wish you a belated and very Happy Hanukkah.

Many of you may be familiar with the Candlelight Processional, a Disney show that traces its roots back to predecessor presentation that started in Disneyland in 1958, and which was duplicated at the Magic Kingdom in 1971. The show relocated to America Gardens Theater in 1994. That theater is in Epcot, along the shore of the World Showcase Lagoon and directly across the promenade from the American Adventure.

Each year a celebrity narrator and a huge choir and orchestra perform traditional holiday songs while and retell the biblical story of Christmas.

Like many things at Disney, the Candlelight Processional show has changed a bit over the years. If you’ve listened to this podcast, you know that I am something of a traditionalist and enjoy many Disney things the way they were.

For example, in 2013, Disney changed the scriptures in the Candlelight Processional from the King James versions, which honestly are kinda hard to understand, to the more modern English Standard Version.

In 2013 Disney also dropped a poem from the show. The poem was written by Dr. James Allen Francis who was born in 1864, who was from Nova Scotia, Canada, and who became a pastor at the age of 21. Over the years Dr. Francis wrote a handful of books, and he also wrote one little 298-word poem that – in its day – became popular. Really popular. In fact, and a little strangely, his poem became so popular over the years and along the way, the authorship of the poem fell into obscurity. Even now the words to Dr. Francis’s poem are often credited to an anonymous author.

Anyway, back to Disney. Since the poem by Dr. Francis was dropped from the Candlelight Processional show in 2013, it means that the last time it was presented in Epcot was in 2012. That year there were some great celebrity narrators who read Dr. Francis’s poem, including

…and a few others that, well, honestly, I didn’t really recognize.

We may never know why Disney pulled Dr. Francis’s little poem from the Candlelight Processional, but I for one miss that poem. So this year, for Christmas 2015, I would like to join those narrators from 2012 and share Dr. Francis’s poem with you. It’s called “One Solitary Life.” Honestly, I hope I can get through it without breaking down, so here I go:

Here is a man who was born in an obscure village as the child of a peasant woman.

He grew up in another obscure village.

He worked in a carpenter shop until he was thirty and then for three years was an itinerant preacher.

He never wrote a book.

He never held an office.

He never owned a home.

He never had a family.

He never went to college.

He never put his foot inside a big city.

He never traveled two hundred miles from the place where he was born.

He never did one of the things that usually accompany greatness.

He had no credentials but himself.

He had nothing to do with this world except the naked power of his divine manhood.

While still a young man the tide of popular opinion turned against him.

His friends ran away.

One of them denied him.

He was turned over to his enemies.

He went through the mockery of a trial.

He was nailed upon the cross between two thieves.

His executioners gambled for the only piece of property he had on earth while he was dying, and that was his coat.

When he was dead, he was taken down and laid in a borrowed grave through the pity of a friend.

Nineteen wide centuries have come and gone and today he is the center of the human race and the leader of the column of progress.

I am far within the mark when I say that all the armies that ever marched, and all the navies that were ever built, and all the parliaments that ever sat and all the kings that ever reigned, put together, have not affected the life of man upon the earth as powerfully as has this one solitary life.

Merry Christmas, and until next time my friend, may God bless you.