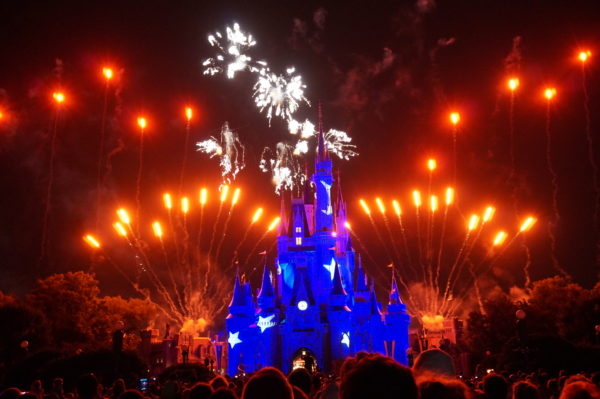 The Wishes Nighttime Spectacular at the Magic Kingdom has had a good run.  It’s been going strong for 14 years.

However, all good things must come to and end, and Wishes is about to retire.  Wishes will soon give way to a new castle show: Happily Ever After.

The new show will transform Cinderella Castle in ways that you’ve never seen before with more lasers, more lights, more fireworks, more projections, and more characters than ever before. The 18 minute show combines original animation with an original score by a 75 piece orchestra to create an amazing adventure based on 25 popular Disney films including the classics and more contemporary movies.

Say good bye to the long-running Wishes Fireworks Spectacular at the Magic Kingdom.

Happily Ever After will use the latest in fireworks and pyrotechnics to create an inspiring and heartwarming tale with characters from Moana, Brave, Big Hero 6, The Princess & the Frog, Zootopia, Aladdin, and The Little Mermaid. Quasimodo from The Hunchback of Notre Dame will swing from the turrets of the castle, and Maleficent will takeover wrapping it in her signature green evilness. At one point, the castle will turn into a tower made completely of toys when Woody and his Pals from Toy Story make their appearance.

The story comes to life through state-of-the-art projection mapping technology.

At the beginning, characters present their dreams of hope, wonder, and magic, but the villains soon take over and try to squash their dreams. Then the heroes come in to save the day. It’s inspiring and humorous at the same time in a way that is classically Disney.

Happily Ever After debuts on May 12 and is presented nightly. However, show times may vary depending on park hours.

If you’d like to get a sneak peak at the new Happily Ever After castle show, you can check out video preview here:

Will you miss Wishes at the Magic Kingdom?