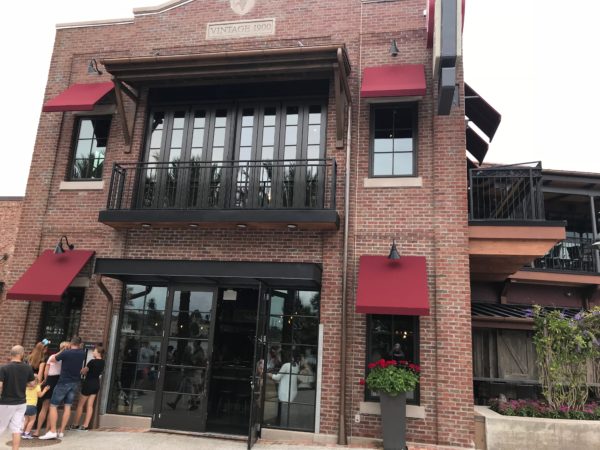 The transformation from Downtown Disney to Disney Springs has taken some time, but it has been all-encompassing, ambitious, and impressive. Even stores and restaurants that have been in the area for years have seen changes, but today we’re talking about a brand new dining location in the area.

Wine Bar George is an estate-style wine bar and is the brainchild of Master Sommelier George Milliotes. The website says that Miliotes is a “passionate educator and curator of wines”, and he’s also one of only 249 people worldwide to be certified by the Court of Master Sommeliers.  It’s easy to say that he knows what he’s doing when it comes to wine.

George isn’t new to Disney World. He was part of the team that opened California Grill at Disney’s Contemporary Resort, and he managed the restaurant from 1995 until 2002 where he created an award winning wine list among other things.

He was excited to take on this new project because he was able to train and hire his own staff and share his mass of knowledge, which spans a 40-year career. Wine Bar George opened May 19th offering 135 wine selections from all over the world – Portugal, California, France, Italy, and Oregon – by the ounce, by the glass, or by the bottle along with small plates, charcuterie, shareable entrees, and dessert, which the servers have been trained to pair perfectly with one of the wine selections.

Miliotes brought Chef Ron Rupert on board as Executive Chef. He established a menu of seasonally relevant items and makes everything in house. The menu includes European-style sandwiches, cheese, olives, hummus, charcuterie, cookies, and of course wine.

If you prefer cocktails, beer, cider, or frosé, that’s available too. The beers and cider selections also span the globe hailing from Florida, Colorado, Missouri, the Czech Republic, Germany, Georgia, and Michigan. All of the items are available a la carte in the table-service restaurant.

The location also features a counter-service area where you can purchase a prepared picnic basket for either two people or four people that includes a carafe of wine and wine glasses.  You can also order wine by the glass together with a selection of food items.

Wine Bar George is open from 11am to 2am, and Advanced Dining Reservations will open on May 25th for dates starting on June 25th.