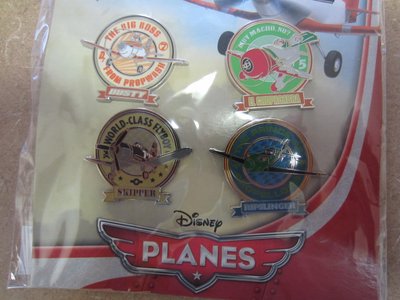 On August 9, Disney released its latest movie called “Disney Planes.” (The movie was released in the UK on August 16.)

During its opening weekend, the movie earned $22.5 million.

According to sources, the movie cost just $50 million to make – so it seems that the movie could be on its way to at least breaking even when you factor in future ticket sales outside the US and merchandise sales;  and, you can be sure, there is a lot of money to be made in merchandise. The Pixar smash hit “Cars” has sold more than $10 billion in retail toy sales since the movie came out in 2006.

However, while breaking even is nice, so far it looks like Planes won’t be a smash, at least when compared to some other Disney Pixar offerings.

Want to win some Disney Planes trading pins?
Check out the entry instructions at the end of this article.

It’s nice that Planes earned $22.5 million, but that seems mild when you compare it to the fact that no Pixar film has ever earned less than $60 million during its opening weekend.

But Planes isn’t a Pixar film. It’s a movie by DisneyToons.

Not A Pixar Film

Confused? You have a right to be.

If you look carefully, you will not see the Planes movie labeled as a Pixar movie. It is always labeled as “Disney Planes,” not “Disney Pixar Planes.” While it came out with the general Disney label, it was specifically made by a part of the Disney organization called DisneyToons.

DisneyToons is the arm of Disney that was responsible for some pretty luke-warm, but profitable, sequels and direct-to-DVD films like “The Little Mermaid – Ariel’s Beginning” and “Bambi 2.”

Sources report that when John Lasster joined Disney after its acquisition of Pixar, he became the Chief Creative Officer over all Disney’s animation. He personally didn’t like the idea of Disney creating less-than-great quality films like “Bambi 2.” Until this time, DisneyToons was pumping out about six movies a year. Lasseter killed many of those projects, and now DisneyToons makes about one movie each year.

Still, Lasseter attended the opening of the Disney Planes movie. As Chief Creative Officer it was probably part of his job duties.  But it also suggested an implied stamp of approval by Pixar of the Planes movie, which is a very obvious attempt to reproduce the success of Cars.

It may be a little early to see if Planes will be a huge hit like other Pixar offerings has been. So far, it doesn’t look good.

Still, there are some merchandise offerings around Disney World with Planes toys. These are a combination of items that you can purchase at a Disney Store location and other items that are offered only in Disney Parks.  While the movie might not become a blockbuster, the toys are pretty cool.

Let’s take a look at some Disney Planes merchandise.

Would you like to win a set of four brand new Disney trading pins that celebrate the Disney Planes movie?  Just send an e-mail to me at [Contest is over – congratulations to Amy from Virginia]. I’ll add you to our mailing list (if you aren’t already on it) and enter you into a drawing. One lucky winner will get this set of four Disney Trading pins.

I’ll select one recipient on or around September 4, 2013. I’ll request your mailing address, and send the prize to you. It’s that easy! This give-away is open to everyone, everywhere.

What do you think about this Disney Planes merchandise?