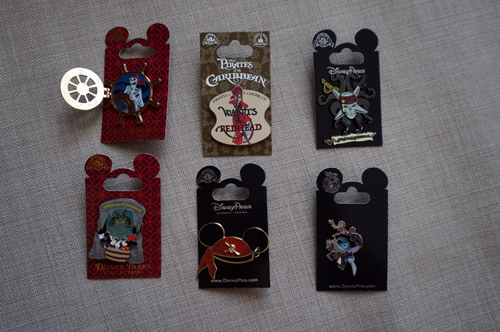 All attractions at Disney parks tell stories, and Pirates of the Caribbean is no different. It tells the story of the lives of a band of pirates – their battles, the pillaging, and their eventual imprisonment.

It all stared way back in 1967 in Disneyland. Walt Disney himself supervised the construction of this groundbreaking attraction, although he passed away just a few months before it opened.

Walt Disney World later opened an Adventureland version of Pirates in the Magic Kingdom in 1973, and in 1983 and 1992 versions opened in Tokyo Disneyland and Disneyland Paris, respectively.

The first Pirates film opened in 2003 and the story of pillaging pirates has grown and expanded ever since.

Let’s take a look at the six Pirates Disney Trading pins you can win this week:

You can enter this sweepstakes using the form below to win all these pins.

This sweepstakes ends July 10, 2015, so be sure to enter, share your entry with your friends, and encourage them to enter too. It will be a fun way to increase your chances of winning, and give your friends a chance to win too.

Are you a fan of Pirates of the Caribbean?  Would you like to win these pins?