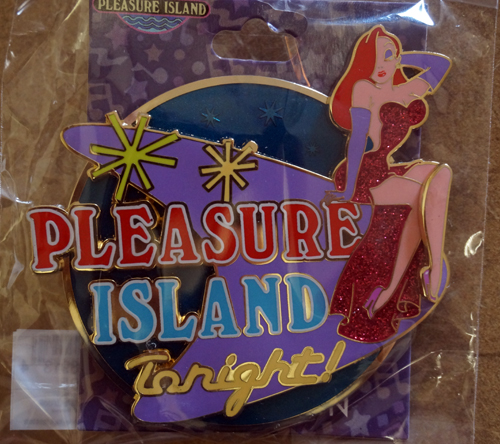 Are you a fan of Jessica Rabbit from the 1988 Disney Touchstone film “Who Framed Roger Rabbit?”

If you’ve seen the film, Jessica is hard to forget. With her deep red hair and curvy body, Jessica admits that “I’m not bad, I’m just drawn that way.” She is selfless and compassionate while doing everything possible to loyally support her husband Roger Rabbit.

Both Jessica as a character and “Who Framed Roger Rabbit” as a film represent a turning point for the Disney Company, when it started to make more innovative and interesting films as it approached the 1990s.

Since Disney’s Hollywood Studios, or the Disney MGM Studios as it was known in the beginning, opened in 1989, just a year after the film’s debut, there was initially a big Roger Rabbit presence in the park.

The now-defunct Backlot Tour featured props from the film, and park guests could take their photo in front of character cut outs from the film.

There as a Jessica Rabbit Store, called “Jessica’s”, in the Disney Springs Pleasure Island area that featured a huge neon sign of Jessica.

However, by 2000, Disney had removed most references to the film from the parks.

There are still a few Roger Rabbit traces around the parks. You can still see a Benny the Cab ride vehicle used in the film in the Backlot Express quick service restaurant in the park.

Let’s take a look at the amazing Jessica Rabbit pins you can win this week:

You can enter to win a Jessica Rabbit prize pack using the form below.

This sweepstakes ends May 8, 2015, so be sure to enter, share your entry with your friends, and encourage them to enter too. It will be a fun way to increase your chances of winning, and give your friends a chance to win too.

Would you like to win a Jessica Rabbit trading pin prize pack?