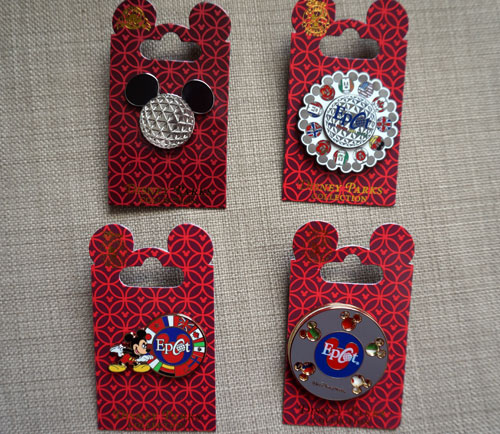 Ever since it opened as Epcot Center in 1982, the park has celebrated technological innovation and the cultures of the world in a way that is both unique for theme parks and unique for Disney.

Did you know that:

It took three years and cost an estimated $1 billion to build Epcot?

The Sherman Brothers, the pair that wrote many songs for Disney parks and movies, wrote a song specifically for the opening of Epcot called “The World Showcase March”?

Disney announced in 1982 that Israeli, Spanish, and Equatorial Africa pavilions would be added to World Showcase, but they never happened.

There are nineteen large torches around World Showcase Lagoon that represent the first 19 centuries. As the Illuminations show ends. The globe opens to reveal a final torch which represents the 20th century.

Let’s take a look at the pins you can win this week:

This sweepstakes ends May 1, 2015, so be sure to enter, share your entry with your friends, and encourage them to enter too. It will be a fun way to increase your chances of winning, and give your friends a chance to win too.

Would you like to win Disney Trading Pins that celebrate Epcot?