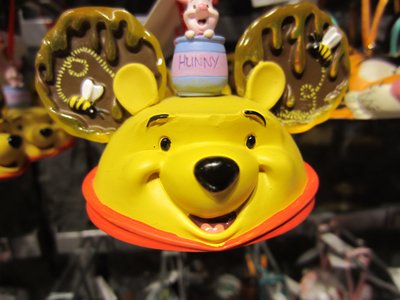 It’s Christmas in July! Disney has introduced a series of resin Christmas ornaments that pay tribute to what could be the ultimate Disney merchandise symbol – the Mickey Ear Hat.

The ornaments are available now in Walt Disney World in at least two locations – in the Disney Days of Christmas in Disney Springs as well as Ye Old Christmas Shop in the Magic Kingdom.

The ornaments were created by the Disney Design Group, which is Disney’s group of in-house artists that creates artwork that eventually becomes merchandise, packaging, and even theme park guide maps.

Each ornament builds on the classic Mickey ear shape, but then adds plenty of details for the individual character being represented.

Let’s take a look at some of the items for sale.

Check out the entry instructions at the end of this article.

Would you like to win a Winnie the Pooh Ear Hat Christmas ornament?

To win, just send an e-mail to me at [Contest is over – Congratulations to the winner, Janet F from California].  I’ll add you to our mailing list (if you aren’t already on it) and enter you into a drawing to win the Winnie The Pooh Christmas ornament.

I’ll select one recipient for the prize on or around August 1, 2013. I’ll request your mailing address and then send a prize to you. It’s that easy! This give-away is open to everyone, everywhere.

What do you think about these Christmas ornaments?