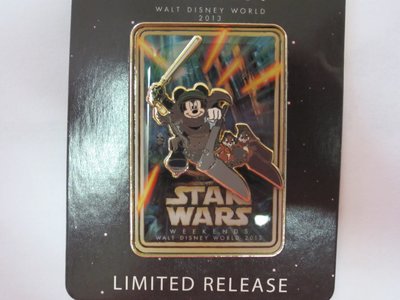 It’s that time of the year again – time for Star Wars Weekends at Disney’s Hollywood Studios. There are plenty of things to see and do during Star Wars Weekends, from the Storm Troopers show to the Hyperspace Hoopla to the Star Wars Parade.

But many people love Star Wars weekends because it is their chance to shop for some very interesting Star Wars merchandise, including many items that bring the worlds of Disney characters and Star Wars characters together in very fun ways.

You can win some exclusive and some limited edition merchandise from Star Wars Weekends from World of Walt by following the entry instructions later on this page.

But first let’s take a look at some of the merchandise for sale at the Studios.

If you have never seen or heard of Darth’s Mall, that is because it only shows up on Star Wars Weekends. (The name is a clever take on the Star Wars character Darth Maul.) The mall is located in a huge temporary tent that Disney sets up near the Rock N roller coaster Starring Aerosmith and the Hollywood Tower Of Terror. Normally this area is blocked off to guests, but Disney opens it during Star Wars Weekends.

Now this is no ordinary tent. It is huge, and complete with air conditioning, interesting displays of merchandise, and a check out area with (what I would estimate to have) 20 or 30 modern cash registers ready to ring up your purchases.

Let’s take a look at some of the stuff you can get at Darth’s Mall.

Here is your chance to win some exclusive merchandise from Star Wars Weekends. We have six different prizes we are giving away.

Would you like to win one of these fun prizes? Just send an e-mail to me at [the contest is closed – see the winner’s list below]. I’ll add you to our mailing list (if you aren’t already on it) and enter you into a drawing to win one of these six prizes. I’ll select one recipient for each prize on or around May 30, 2013. I’ll request your mailing address and then send a prize to you. It’s that easy! This give-away is open to everyone, everywhere.

Congratulations to the winners:

What do you think about Darth’s Mall?