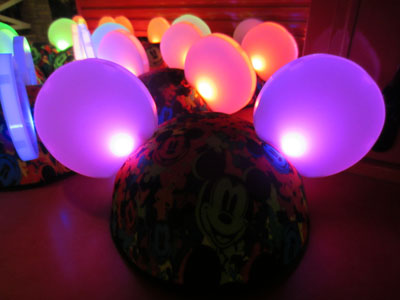 Win And See: Glow With The Show Ear Hat

Earlier we reported that Disney was bringing the Glow With The Show Ear Hats to the Fantasmic show at Disney’s Hollywood Studios.  The technically advanced hats were first used by Disney in the World Of Color Show at Disney’s California Adventure

Soon Disney World will also incorporate the electronic ear hats into the Wishes fireworks spectacular at the Magic Kingdom as well as the at the Osborne Family Spectacle of Dancing Lights at the Studios.

All that is exciting news. But it raised an interesting question: What if not enough people buy the hats?

If many people purchase the hats, the effect is impressive: a sea of color blanketing the audience that truly extends the stage of the show in an amazing way.

But if very few people purchase the hats, then the effect is, well, kinda lame. You see a few colored dots here and there blinking in a way that, because the numbers are small, seems almost random.

Want to win a Glow With The Show Ear Hat?
Check out the entry instructions at the end of this article.

I attended the Fantasmic showing a few days after the introduction of the Glow With The Show hats. I wanted to see for myself if enough people would have the hats to make for an impressive experience or a lame one.

Good news: Enough people had the hats on to make for an effective show.

Bad news: Only barely enough people had on the hats. I would guess 5%, which is my unscientific estimate. If just a few percent fewer had the hats, I think the effect would have been, well, ineffective.

You can see how the effect worked in the video below.

Overall I’m glad to see that the hats were selling.

Available At Many Locations

Disney was definitely promoting the hats throughout the Studios. You could purchase them at Beverly Sunset, Once Upon A Time, Head To Toe, Mickey’s Of Hollywood, the Trolley Cart, Celebrity 5 & 10, and the Disney Truck Shop that was parked at the entrance to the Hollywood Hills Amphitheater, which is home of Fantasmic.

Disney has also started to sell the hats in other places too, including the Chapeau Hat Shoppe in the Magic Kingdom.

Win A Glow With The Show Ear Hat

Would you like to win a Glow With The Show Ear Hat, which sells in the parks for $25? Just send an e-mail to me at [Contest is over – Congratulations to the winner, Theresa from Massachusetts.].  I’ll add you to our mailing list (if you aren’t already on it) and enter you into a drawing. One lucky winner will get a Glow With The Show Ear Hat. I’ll select the recipient on or around October 31, 2013. I’ll request your mailing address, and then send a prize to you. It’s that easy! This give-away is open to everyone, everywhere.

You can win your own Glow With The Show Ear Hat.

Would you like a Glow With The Show Ear Hat of your very own?