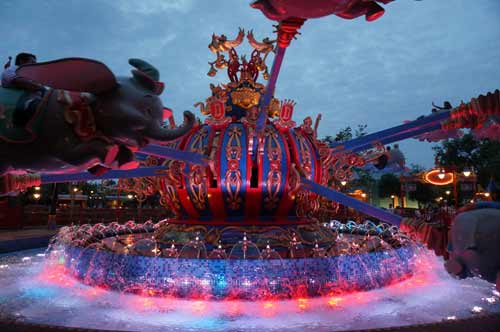 When Walt Disney envisioned and began creating Disney World, he wanted it to be a place that families would enjoy time together regardless of age. He wanted a clean, safe place that felt both familiar and completely new no matter how many times guests visited. This is why we love Disney, but Magic Kingdom is the best of the best. Here’s why.

There are three mountains in Disney’s Magic Kingdom. They are all unique and famous for many different reasons.

Big Thunder Mountain Railroad is a classic rollercoaster with a Disney touch. Walt loved trains, so it’s no surprise that they can be found everywhere around Walt Disney World Resort. Board the train, and you’ll careen through an old gold mining establishment complete with fountains and unexpected twists and turns. It’s impossible to leave this ride without a smile on your face.

Splash Mountain, Big Thunder’s neighbor, is themed after Disney’s 1940’s movie Song of the South. The log-flume ride features classic characters, catchy music, fabulous detail, and many thrills. There are a few small drops, but the final drop is the true thrill. The 50-foot plunge at a 47 degree angle sends guests flying at a maximum speed of 40 miles per hour. Warning: you will get wet!

Space Mountain in Magic Kingdom’s Tomorrowland is a dark rollercoaster style ride with amazing effects. The stars inside follow the pattern of the actual stars in the sky. What better effect is there?

These three mountains are amazing in and of themselves, but having them all in one place is an incredible opportunity.

Between 2010 and 2014, Magic Kingdom’s Fantasyland underwent the largest expansion project in Disney’s history. The expansion saw many closures, but existing rides were moved and new attractions were added. This is now one of the busiest places in the park featuring one of the most popular rollercoasters, Seven Dwarfs Mine Train.

Fantasyland is a place where kids’ dreams can come true, and adults can become kids again. Guests can ride Dumbo the Flying Elephant, hear Ariel sing, fly over London with Peter Pan, and bounce through Hundred Acre Woods in Winnie the Pooh’s honey pot.

Main Street U.S.A is the first thing you see when you walk under the railroad tracks and enter Magic Kingdom. It is the ultimate reveal, and it plays out just like a movie. This is exactly the way Walt intended. Main Street is themed like any small town’s main street so the storefronts are meant to feel familiar and like home. It’s also your pathway to other worlds. From Main Street, you can go to a futuristic world where humans and aliens interact freely, see an incredible castle where anyone can be a prince or princess, take on new adventures, and experience old-time America.

Wishes Nighttime Spectacular is the ultimate Kiss Goodnight. It is a wonderful way to end your day at the happiest place on earth because it is both an amazing visual and auditory experience and a simplistic show. Guests will recognize the familiar songs and character voices and experience something new as they are woven together like only Disney can. The fireworks show is more than just a show; it is meant to evoke an emotional response in viewers. You can’t help but feel like Tinkerbelle is actually sprinkling pixie dust on you and that Jiminy Cricket is speaking to you. Go ahead- make a wish upon a star. Anything your heart desires just might come true.

Disney is full of surprises. Walt, Roy, and the Disney Imagineers purposefully hid details in the architecture all over Disney World. Instead of rushing from ride to ride and show to show, stop and take a look. What do you see? What do you hear? What do you smell? Nothing happens by accident at Disney World; everything is meticulously planned, but it’s easy to miss the details in all of the excitement.

Perhaps the coolest thing is the actual placement of the park. It’s at the top of the resort, and it takes a while to get there from all but a select few resort hotels. Even if you drive, you’re still not there. Drivers have to park and take the monorail or a ferry to get to the park. All of this increases the anticipation and the feeling that you really are travelling somewhere.

What is your favorite thing about Magic Kingdom?