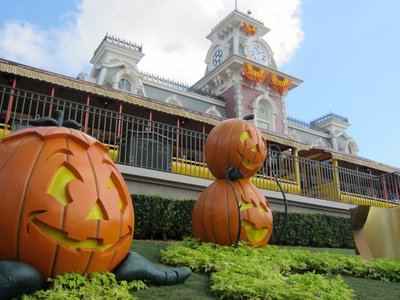 Why October Is A Great Time To Visit Disney World

When you think about planning a trip to Disney World, the time when you go will have a big impact on your experience. Many people assume right away that they will go during the summer or around Christmas time. While there is no bad time to go to Disney World, you might want to think about going during a time you haven’t considered before – October.

The cost of a Disney vacation – especially for your lodging through a Disney Resort Hotel, the use of a Disney Vacation Club villa, or a general hotel – is largely driven by when you visit. You can spend much less money during less-popular times of the year. Going at Christmas? You will spend top dollar. Going in October? You will get a bargain, relatively speaking.

To show the comparison, I searched for the cost of staying at Disney’s Coronado Springs Resort for four weekday nights in October. The cost was about $381 per night. The same room during the week of Christmas? You will pay $423 per night.

As long as you aren’t visiting on or around the US Columbus Day holiday, the crowds at Disney World are generally very low during October. They might be a bit lower in September or in January. Crowds tend to be the highest around Thanksgiving, Christmas, and New Years, as well as the summer time and holidays when kids are out of school.

There are two special events that typically happen during October:

The Epcot Food And Wine Festival typically runs from September to November, meaning October is a great time to experience this very popular event. Locals with Disney Annual Passes often visit the festival on Fridays and during the weekends, but during the week you can experience both the festival with lower crowds as well as all the other normal fun that Epcot offers.

As part of the festival, you can visit many different food and wine booths temporarily located around the World Showcase lagoon. For just a few dollars you get an appetizer or tapas sized portion of foods from around the world, and beer and wine to match. You can also attend special event parties, classes, and tastings. It’s a great time for the inner-foodie in you.

Disney also offers Mickey’s Not So Scary Halloween Party on select nights, typically starting in early September and going through to the end of October. This is a hard-ticketed event, meaning that it takes place after normal park operating hours and you need to pay a separate, special admission price instead of a normal park admission price. The event takes place in the Magic Kingdom, often goes from 7pm to midnight, and costs somewhere between $55 – $70, depending on advanced-purchase discounts and the particular day you select (with dates closer to Halloween costing more money). The event offers trick-or-treating stations as well as a Disney character greeting spots, a special parade, and a special fireworks presentation.

While there is really no bad time to visit Disney World, there are some times that are cheaper and have lower crowds. October is one of those times. You might want to consider it when planning your next vacation.