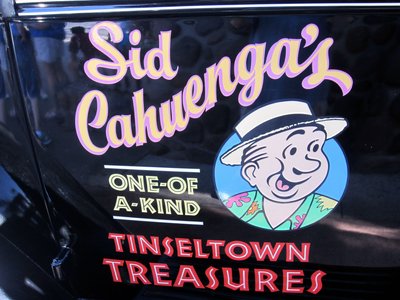 Have you ever heard of Sid Cahuenga? If you’ve ever been to Disney’s Hollywood Studios, you’ve definitely walked right by his house. Or rather, you’ve walked by his store. Confused? That’s because there is lots of confusion about poor old Sid. Let’s take a look at the real story of Sid Cahuenga.

If you read information on the internet or even ask a Cast Member at the Hollywood Studios, you might get many different and even conflicting answers. Most people agree that Sid Cahuenga moved from the Midwest to live in Hollywood, California in the 1920s to be closer to the movie industry which he loved. He opened a store in his home to sell movie-related memorabilia.

Many people believe that Sid was a real person. Some will swear that Disney created an exact replica of Sid’s real house in Florida. Some even say Disney carefully moved Sid’s house from Hollywood to Florida, or that Sid himself works at Disney’s Hollywood Studios. All these are fascinating stories, and somewhat fit into the generally accepted Disney legend, but they aren’t true.

Disney made up the character of Sid, and as they often do people have run with the story.

The Yesterland web site (Source) reports doing a search against a database of all newspapers and not finding any results for “Sid Cahuenga”. So there never was a real Sid – he is just a terrific story made up by Disney that seems, like so many terrific stories, to have a grown a life of its own.

The name Sid Cahuenga might sound familiar because it contains components of real Hollywood. Sid Grauman was the owner of the famous Chinese Theater in Hollywood (the same one recreated at the end of Hollywood Boulevard that houses The Great Movie Ride, but is now hidden by the Sorcerer’s Hat). And Cahuenga Boulevard is a real road that crosses Hollywood Boulevard in California.

Also, there have been a few different Streetmosphere performer at Disney’s Hollywood Studios who played Sid. Some many people can report seeing a real Sid. But they saw a performer playing the part of Sid.

All these elements add to the authenticity of the made-up story.

Sid’s Antique and Curio store is located at the entrance to Disney’s Hollywood Studios, just to your left as you walk in the park and head up Hollywood Boulevard. It is easy to miss as you first wander into the park and your attention is pulled toward the huge Sorcerer’s Hat at the end of the street. But if you look to your left, just next to Guest Services, you will see Sid’s house-turned-store.

Disney legend tell us that when Sid built his house in the 1920s, it was outside of town. In time, through the 1940s, the town grew up and expanded, and soon Sid was living in the expanded city itself. He was a ‘hold out’ in his neighborhood – a homesteader on his own street. In time, the old single family homes of his original neighborhood gave way to progress and new, shining shops in the 1940s and 1950s, Sid’s home, built in the arts and crafts style that was popular in the 1920s, looks a bit odd next to the Art Deco shops nearby. Sid was determined to stay in his home, even as his neighborhood changed around him. He decided to take advantage of all the traffic in his increasingly busy street by selling bits of Hollywood history – autographs, books, discarded props from the movies, and so on. He collected this merchandise in his trusty Ford truck from the nearby movie studios.

While Sid is a fictional character, you can see some fun memorabilia from real Hollywood in his house / store. While there isn’t as much real-movie stuff as there was when the store originally opened, you can still find autographs, photos, and mementos from the real movies.

Also, if you look in the back of Sid’s truck – the one he used to drive around Hollywood to collect his merchandise to sell – you can see a piece of Disney World history. In the truck bed is a diver from the original 20,000 Leagues Under The Sea attraction from the old Fantasyland in the Magic Kingdom.