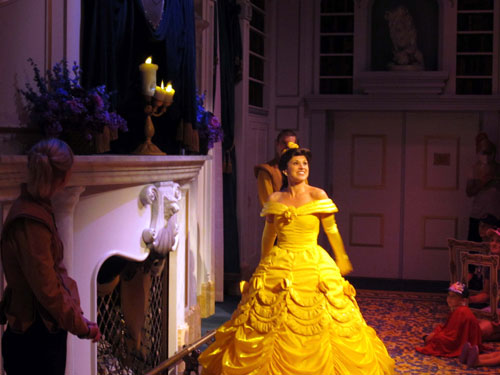 Where to Meet the Disney Princesses

Disney characters are really popular, and fans love to meet them, talk to them, snap a picture, and get an autograph. The princesses are especially popular because they’re face characters that can and will talk to you.

Maybe you want to quickly tell Jasmine about an adventure you had or Belle about a good book you just read. They relish these opportunities and often make a big scene in front of other guests if the story is really good.

But finding and meeting each princess can be difficult especially if you want to do it all in one vacation. That’s why I’ve created this guide- so you can find and meet each of your favorites without the stress!

You should know that the MyDisneyExperience app can help with locating characters, too. Just tap the “Characters” tab to find your current location and who is closest to you or find the location of your favorite character. You can also search a specific character and find all of the places they appear.

Let’s take a look at the locations of the Disney Princesses.

Anna and Elsa were moved around quite a bit when they first arrived in Disney World, but they have made their way to their permanent location in World Showcase’s Norway Pavilion. They are located at the end of the Frozen Ever After ride in the Royal Sommerhus.

While you can’t meet and greet them in Disney’s Hollywood Studios, you can see them in Echo Lake at the For the First Time in Forever: A Frozen Sing-Along Celebration several times throughout the day.

Ariel has a few meet and greet locations, but the only place you can see her in mermaid form is in Ariel’s Grotto in Fantasyland. There is a FastPass available here, and I would recommend using it since she’s pretty popular.

Ariel also appears in Magic Kingdom at Cinderella’s Royal Table. She is in her human form here, and she’ll meet with you at your table, sign autographs, and take pictures. This character dining experience is open for breakfast, lunch, and dinner, but it does require an Advanced Dining Reservation since it’s one of the hardest ADRs to get in all of Disney World.

You can also find Ariel at Akershus Royal Banquet Hall in Epcot. This restaurant in the Norway Pavilion serves up unique Norwegian food that may not be to the liking of picky children and even adults. If you’d like to dine here, consider getting a breakfast reservation since the food has more familiar flavors.

Princess Aurora appears in Magic Kingdom next to City Hall in Town Square. Since she usually arrives in the afternoon, this is a good stop on your way out of the park for your mid-day break. Otherwise, you’d have to backtrack. It would be a good excuse to ride the Walt Disney World Railroad, though!

Aurora also joins the other princesses at Cinderella’s Royal Table. She’ll sign autographs and take pictures at each table.

In Epcot, you can find Aurora in France near the water. It’s a beautiful scene, and her wait is usually pretty short. She is also at Akershus with her friends.

Belle has a unique location in Enchanted Tales with Belle in Magic Kingdom’s Fantasyland. This isn’t your typical meet and greet but more like an interactive show as Belle, dressed in her famous gold ball gown, and Lumiere retell the story of Beauty and the Beast. You become part of the story, and she’ll pose for a quick picture with you, but she doesn’t do autographs at this location. There is often a long wait for this show, so I would suggest a FastPass+ if Belle is at the top of your list.

In Epcot, Belle meets guests in France. She is dressed in her blue smock dress and stands by the water. She is highly visible, which probably contributes to her wait being an hour or more. If you want to meet her here, arrive just before 11am and head straight to this spot.

Belle is also among the guests at Akershus, but she plays an important role as the official greeter. You’ll see her in her gold ball gown most of the year, but if you happen to be visiting during Christmastime, she’ll be dressed in a beautiful maroon, velvet gown.

Cinderella is probably Disney’s quintessential princess. She even has her own castle in Disney World! She is the official greeter for the restaurant inside her castle: Cinderella’s Royal Table. She’ll pose for pictures with your family as you enter, and they’ll appear on your Photopass as a complimentary photo package that is part of your purchase.

Besides Cinderella Castle, this princess can also be found at Princess Fairytale Hall in Fantasyland. This is a prime spot to meet the princesses, so I suggest a FP+ if your goal is meeting them.

In Epcot, Cinderella is part of the Akershus lineup.

She also hosts dinner at 1900 Park Fare in Disney’s Grand Floridian Resort and Spa. Prince Charming joins her occasionally, but the Tremaine family is always part of the party. They are hilarious and really make this character dining a lot of fun. It’s a much easier ADR to get since it’s outside of the parks, but you still should have a reservation.

Jasmine is an adventurous princess and the first Disney Princess with something other than a Western European heritage. She appears daily in Magic Kingdom’s Adventureland at the Magic Carpet ride. Aladdin usually joins her, and the Genie may pop in for a short time as well. While this is your typical meet and greet, Jasmine usually chooses a special kid from the crowd to ride the Magic Carpets with before her meet and greet begins at 9:30.

Jasmine is also a guest at Cinderella’s Royal Table in Magic Kingdom.

In Morocco, Jasmine is right at home. She and Aladdin can be found throughout the day in a small room in the back of the Morocco pavilion. The line can get pretty long especially in this tight space, so check the MyDisneyExperience app for times and plan to arrive a little early.

Finally, Jasmine occasionally joins the Character Palooza in Disney’s Hollywood Studios. She is sometimes alone or with Aladdin or Genie.

Merida, from Disney’s movie Brave, is the first princess that didn’t have a prince. Girls (and their parents!) find her to be a great role model because of this.

You can meet Merida in Magic Kingdom at the Fairytale Garden to the right of Cinderella Castle. She usually starts greeting guests at 9am.

Mulan also didn’t need a man though her father wanted her to marry. This independent princess can be found in China either beside the temple or in the front of the pavilion depending on the weather.

She also joins the other princesses at Epcot’s Akershus Royal Banquet Hall and occasionally appears at Hollywood Studios’ Character Palooza.

Pocahontas is the only Disney Princess that appears in Disney’s Animal Kingdom. She can be found on Discovery Island usually in the Oasis section to the left of the Tree of Life. She appears several times a day but can be a little difficult to find in this park meant to get you lost. If you need help finding her, ask a Cast Member.

Rapunzel can only be found in Princess Fairytale Hall where she appears with Tiana. This meet and greet can garner some really long waits, so a FP+ is your best option if she’s one of your favorite princesses.

Snow White is the original Disney Princess with the castle in Disneyland belonging to her. She is hugely popular in the Germany pavilion in Epcot’s World Showcase. While it could be because she is highly visible or because her schedule is on the times guide, it could also be because she’s a favorite among guests. Check her schedule and arrive a few minutes early to avoid waiting too long.

Also in Epcot, Snow White can be found at Akershus with the other princesses.

If you’re in Hollywood Studios, check out Character Palooza where Snow White occasionally makes an appearance as well.

Princess Tiana of Princess and the Frog meets and greets guests in Liberty Square behind Ye Olde Christmas Shoppe. She is alone in the morning, and Prince Naveen joins her in the evening. This is an open air meet and greet, but it is shaded by trees.

Do you enjoy meeting Disney Princesses at Disney World?