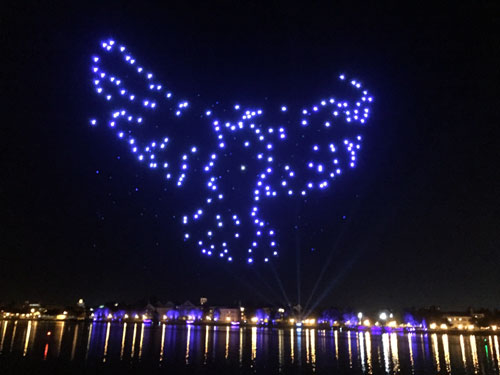 When You Wish Upon a… Drone?

As thousands of people head to the most magical place on earth to celebrate the holidays, Disney has some special surprises in store. Sure, you’ll be able to see your favorite characters dressed up in their Christmas best. You’ll enjoy Christmas food from around the world, and the decorations are beautiful.

You’ll also be one of the first people to experience the largest lighted drone show in the United States.  I’ve seen it myself, and it is pretty amazing!

Starbright Holidays in Disney Springs lights the sky with recognizable images including a Christmas tree, a dove, an angel, and many more in bright colors. The show uses 300 drones to create the images, and this is the first time this has ever happened in the United States.

In fact, the only larger occurrence was in Krailling, Germany on October 7th, 2016 when Intel, the drones’ manufacturer, set a Guinness World Record with 500 drones flying simultaneously. They broke their previous record of 100 drones flying together in 2015.

Disney uses a 30 square foot spot in the parking lot near Cirque du Soleil’s theater in Disney Springs to launch the drones. From here, the drones fly almost completely unnoticed to the lake where they light up and begin the show. While there are only 300 drones flying at a time, Disney has 700 drones in this lot. That’s two fleets and a couple extra just in case.

Starbright Holidays did a five-minute demonstration on November 16th that could be considered a rehearsal. On November 20th, the show officially began and takes place two times nightly at 7pm and 8:30pm.

Disney partnered up with Intel to use their drones, sometimes called Flixels, to create the show, which was actually inspired by a scene from Tangled when the entire city of Corona was lit up with Chinese lanterns. It was a beautiful and inspirational scene in the movie, and Disney wanted to recreate that in real life.

Intel designed the fragile drones with entertainment in mind, and it seems they hit the mother load with Disney, the biggest player in the entertainment industry, picking up their creation. They considered everything from manufacturing, efficiency, and safety to operator and audience experiences. The small, fragile drones are made of soft, flexible plastic with no screws. The body is made of Styrofoam, and the whole thing weighs less than ten ounces. There are four LED lights on the drone that can make four billion color combinations. The drones can fly for 20 minutes before they need to be recharged or replaced with another drone. Maybe this is why Disney has a “second string.”

The Flixels are stable enough to fly in 22 mph winds, and they are also water resistant meaning they can fly in the rain.

Disney applied for approval with the Federal Aviation Administration (FAA) and was granted the go ahead even in Disney’s no fly zone. The approval allows Disney to fly the drones up to 400 feet in the air, though Disney says they’ll max out at 150 feet. The drones are only permitted to fly in restricted areas and not over people – at least not yet. The waiver is for four years.

One huge advantage with the drones is that they’re much safer than fireworks. While both are controlled by computers, the fireworks can burn people and landscape. The drones have no such dangers. Drones are almost more controllable where as fireworks are somewhat unpredictable.

Intel’s drones are also highly automated and take only days to complete a new show sequence. Only a few operators are required, and most shows can be run with only a single operator. The software is easy to update, and it also does pre-flight checks of each and every drone’s battery, GPS, reception, and other important features.

Drones are getting increasingly more sophisticated, and they can now get as close as five feet to each other. This leads to a brighter, more vivid, and more recognizable image than ever before.

Disney recently applied for a patent to protect the drones as they get closer together. An airbag in the drone would activate in the event that the onboard computer recognizes a malfunction or a free fall. It would act as a bubble around the drone and protect it from collision and impact. While previous experiments with parachutes and electronic fences proved ineffective, the airbag bubble seems to perform quite well.

While the drones certainly won’t be replacing Disney’s favorite fireworks shows like Wishes and IllumiNations (at least not right away), you can expect to see them being integrated into the already excellent nightly entertainment at the Walt Disney World Resort. The possibilities are nearly endless, and Disney will make the most of their new technology.

Disney drones – would they make a good replacement for fireworks?