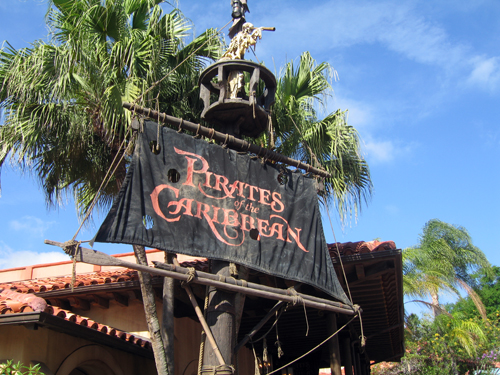 Roy O. Disney, Walt’s brother, dedicated Magic Kingdom Park on October 25th, 1971. Walt did much of the planning on The Florida Project, and construction began on the Walt Disney World Resort just one year after his death.

Cinderella Castle anchors the park and stands prominently at the end of Main Street USA. This castle welcomed almost 20 million visitors in 2014, and Magic Kingdom has been the most visited theme park in the world for six consecutive years.

Did you know that when you visit Magic Kingdom, you are actually on the second level of a two-story structure? That’s right! There is a series of tunnels on the ground level of Magic Kingdom allowing Cast Members to move quickly from one part of the park to another and not be seen by guests. This also means that a character who belongs in Frontierland would not be seen walking through Tomorrowland; Walt saw this happen at his park in California, and he decided to build the so-called utilidors. He originally meant for these to be built underground, but the water table is too high. The area around the utilidors was filled in with dirt from the man-made Seven Seas Lagoon, and few guests realize they are on a second level.

Like other Disney parks, Magic Kingdom tells a story, and every guest is part of the show. When you pass under the train station, it’s like opening the curtain. Main Street USA starts the on-stage experience as guests experience old-time storefronts with unique shopping and treats including candy apples, and hot dogs and fries. Guests then enter the Castle Hub where you can create a story of your own in Adventureland, Frontierland, Liberty Square, Fantasyland, and Tomorrowland.

Magic Kingdom has long been under construction with the infamous blue walls adorning much of the park. With Fantasyland recently opened, many of these walls have disappeared, but refurbishments are still taking place.

The monorail is a Disney icon, but it is currently undergoing refurbishments. Expect modified service and routes through December 2015. The new automated systems that Disney is installing should improve service, but for now it means there are times when the monorail isn’t available, or there are last minute shut downs.

Railroad refurbishment will cause the railroad to close between September 28th and November 5th and Liberty Square Riverboat will close from August 4th through 10th. Pirates Of The Caribbean is currently closed, but is set to reopen in September 26th, 2015. Liberty Tree Tavern restaurant will reopen just in time for Thanksgiving on November 20th, 2015. Finally, Dream Along with Mickey will be closed from July 21st through August 19th.

Magic Kingdom will soon celebrate its 50th Anniversary, and this could come with some fanfare. Rumor has it that Tomorrowland will get a makeover including new attractions and an overhaul to existing attractions. With the new Disneyland Shanghai Tomorrowland catching a lot of buzz, one has to wonder if Disney World will get similar treatment.

Monsters Inc. Laugh Floor and Tomorrowland Speedway may be on the chopping block to make room for the new attractions. The Tomorrowland area probably won’t expand since Fantasyland took up much of the unused space.

What changes do you hope to see at Magic Kingdom? What do you hope doesn’t change?
Leave your comments below.