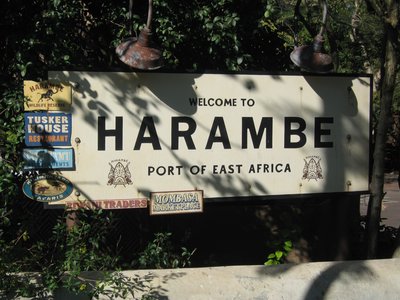 Whatever Happened to the Equatorial Africa Pavilion?

The World Showcase at Disney World’s Epcot theme park opened in 1982 with pavilions dedicated to nine countries from across the globe. The countries represented three continents, but the large continent of Africa was conspicuously absent.

Legendary Disney animators and art directors Ken Anderson and Herb Ryman (responsible for the beauty of such Disney animated classics as “Snow White and the Seven Dwarves”, “Dumbo”, and “FantAsia”) headed the design team for the new pavilion. Alex Haley, whose beloved “Roots” saga of an African American family won a special award from the Pulitzer Board, was also a part of the creative team. The structures, shows, and presentations were designed in detail: a towering Ficus tree overlooking a savannah watering hole, a visual and auditory celebration of African drumming, and a video exploration of African civilizations were just the beginning. Yet the pavilion was never built.

In order to build a pavilion, Disney required the participation of companies operating in the country for countries that the World Showcase pavilions represented. These corporations were expected to provide most of the funds to construct the pavilions, and to maintain the attractions over the years. Reputedly, corporations in South Africa were the only ones able to offer sufficient funding, but Disney declined their offer in order to avoid any association with South Africa’s apartheid policies. Whether or not this tells the whole story (and astute geographers will note that South Africa is not exactly equatorial) the pavilion’s failure to gestate was evidently due to a lack of money.

In current years, it is easy to think of Disney as a company with nearly infinite financial resources and ability. However, the years following Epcot‘s opening were filled with questions, since attendance dropped sharply at the park after a strong opening. Even with financial support from African corporations, Disney may have opted to tighten their belts and halt any expansion until the park was more established.

Modern day Epcot has arguably succeeded very well in the mission to establish itself. Although Disney is cagey with exact attendance figures, it is generally believed that Epcot currently trails only Magic Kingdom and California’s Disneyland in yearly visitors to theme parks. The space for new country pavilions remains, and many Epcot lovers would be thrilled to see a brand new addition to the World Showcase.

Impact Of Morocco And Animal Kingdom

However, the intervening years have changed the landscape at the World Showcase and at Disney World. After Disney failed to realize an Equatorial Africa pavilion, the North African country of Morocco swooped in and sponsored their own pavilion. This pavilion is the only one to be fully sponsored by the country it celebrates, and the stunning grounds certainly represent the African continent in style. 1998 also saw the debut of Disney’s Animal Kingdom theme park, which features many acres dedicated to Africa.

However, the vibrant culture of Morocco, separated from Spain by the tiny Strait of Gibraltar, has as much in common with the nations of Mediterranean Europe as it does with the countries of Central Africa. And Africa at Disney’s Animal Kingdom exists to celebrate the landscape and wildlife of Africa, rather than the human civilizations. So perhaps there is still hope that the archived plans for an Equatorial Africa pavilion could someday be realized.