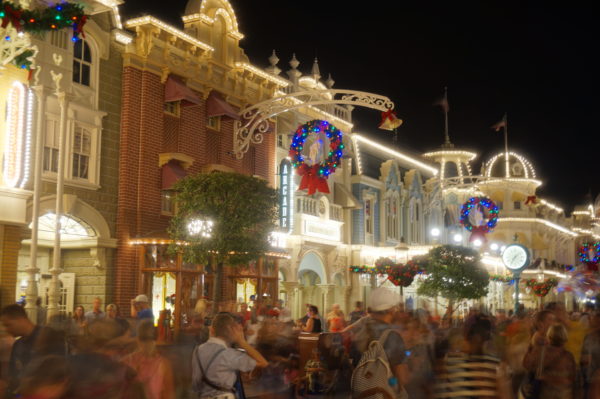 What to Expect at Christmastime 2018 in Disney World

We may only be at the beginning of Fall, and the temperatures in central Florida are still balmy, but Disney is already preparing for Christmas.

The Halloween decorations are up right now, but shortly after October 31st, orange and black will be replaced with red and green, and the spirit of the holidays will be in the air!

Disney World goes big for Christmas, and there’s no better place to be during the most wonderful time of the year than the most magical place on earth!

Let’s take a look at what’s going on during the Christmas 2018 season!

Mickey’s Very Merry Christmas Party starts on November 8th this year and runs on select evenings through December 21st. The party is from 7pm to midnight, so Magic Kingdom will shut down early on party nights, and party guests can enter the park as early as 4pm.

Epcot International Festival of the Holidays

The Epcot International Festival of the Holidays is one of four festivals that run throughout the year at Epcot. The festivals are all centered in World Showcase, but they’ve wandered into Future World in recent years.

The Festival of the Holidays celebrates Christmas traditions from eleven countries around the world. Each pavilion features special holiday food offerings and shows what it’s like to celebrate Christmas in that country.

One of the biggest events during this festival is the Candlelight Processional during which celebrity narrators retell the Christmas story with a choir of singers in the background. Nothing can get you into the Christmas Spirit like this show!

Don’t miss the special holiday presentation of IllumiNations over World Showcase Lagoon! The festival starts on November 18th and goes until December 30th this year!

Disney’s Hollywood Springs gets in on the holiday fun as well! Sunset Seasons Greetings is the parks’ projection show. It transforms the Twilight Zone Tower of Terror with a projection show of laser effects telling Christmas stories, playing songs, and spreading holiday cheer with Mickey, Minnie, and Olaf.

This show runs from November 8th through January 6th.

Jingle Bell, Jingle Bam! returns this year in Disney’s Hollywood Studios. The show, which will run from every night from November 6th through January 6th, is full of fireworks, music, projections, and lights. Guests can see scenes from Mickey’s Christmas Carol, Beauty and the Beast, Pluto’s Christmas Tree, and The Nightmare before Christmas.

This year, Jingle Bell Jingle Bam! will also have a dessert party in the Chinese Theatre Courtyard complete with delicious desserts like Yule Log cake, savory snacks like creamy cheese fondue with pretzel bread, and specialty drinks like gingerbread martinis. There will also be a selection of beer, wine, and non-alcoholic drinks. Disney says that a special VIP character will be available for a meet and greet, and the party starts an hour and a half before showtime. The dessert party starts at $79 for adults and $45 for kids, and the prices are increased to $89 and $49 respectively closer to Christmas.

A smaller event at Disney’s Hollywood Studios is a holiday dinner party. Minnie’s Holiday Dine is a character lunch or dinner with Minnie Mouse and some of her closest friends. At Hollywood and Vine. This character dining event actually takes many forms throughout the year depending on the season. This particular dining event takes place from November 9th through January 6th, and Advanced Dining Reservations are highly recommended. Adults will pay $50 and kids cost $30 plus tax and gratuity. Dining plans with table-dining credits are accepted!

If you’ve never taken a backstage tour at Disney World, I highly recommend it. It’s a real treat for adults and older teens who want to see how Disney World works.

Disney’s Yuletide Fantasy Tour shows guests how Disney World prepares for Christmas. For us, the Christmas season is a couple months of the year, but Disney employs a full-time staff whose job it is to prepare for Christmas all year!

The tour is three and a half hours, so you’ll have plenty of time to see lots of behind the scenes magic from the floral department to the culinary team. The tour costs $139 per guest.

Will you visit Disney for Christmastime 2018?