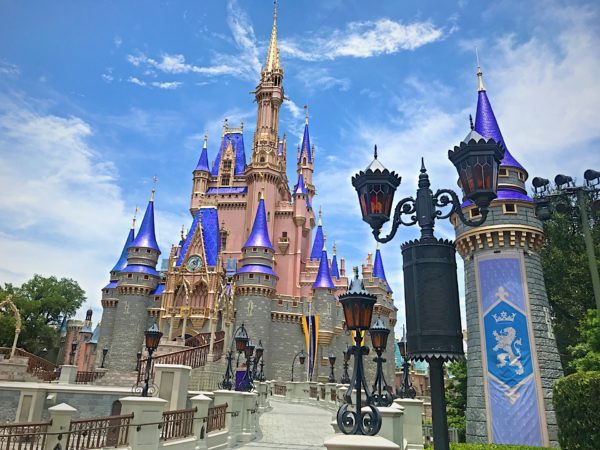 What It’s Like to Visit Disney World During the Pandemic

Early in 2020 and for the first time in forever, Disney Parks across the world closed thanks to the COVID-19 pandemic. Walt Disney World closed in mid-March and didn’t reopen until mid-July.  It was the longest park closure ever.  When the parks did finally reopen, there were lots of new health and safety protocols in place to reduce the risk of transmitting COVID-19.

Until very recently, Disney World operated at 25% capacity. They’ve now increased to 35% capacity, but still, relatively fewer people are visiting Walt Disney World since these protocols have been in place.

Now that Disney World parks have been open for about four months, what is it like to visit?  Based on my own experience plus some input from World of Walt reader and recent Disney World vacationer John D, let’s take a look at what visiting Disney World is like during the pandemic.

Disney recently released their Q4 earnings, and while it wasn’t as terrible as many worried, it wasn’t great either. Thus, Disney World is doing everything they can to encourage guests to return to the parks including offering some smokin’ deals! There are discounts on Disney Resort Hotels and even Disney Parks tickets, which hardly ever go on sale. You can also find great rates off property if that’s your preference. If you want to plan a trip right now, you may save big!

It seems like cleanliness is the name of the game right now. While Disney has always been proud of the fact that their parks are some of the cleanest in the country – like, it’s part of all Cast Members’ job descriptions to pick up trash if they see it – Disney World is now cleaner than ever.

That being said, Disney does regularly remind guests that there is an inherent risk in visiting public places right now, and they even ask you to acknowledge that risk before you arrive on property.  Rest assured that Disney is doing everything they can to keep the parks clean so they can stay open!

The water parks are closed as of right now. The tentative reopening date is March 7th, 2021, but I wouldn’t plan a vacation based on that date.  If 2020 has taught us anything, it’s that anything can change at any time!

You can still enjoy the pools and water features at your Disney Resort Hotel. Disney asks you to practice social distancing here especially since you cannot swim with a face mask on. There are also signs around the pool decks that ask you not to move the furniture.

Planning a Disney World vacation prior to the pandemic was a pretty daunting experience. Disney encouraged you to book Advanced Dining Reservations up to six months in advance, which meant many guests booked resorts at least a year in advance.

Now, Disney has a different kind of reservation system called Park Pass. Before, all you needed to enter a park on any given day was a valid ticket. Now, you have to have a valid ticket AND an advance Park Pass reservation, which you can make on the MyDisneyExperience app or on Disney World’s website. Even at the increased 35% capacity, these passes fill up, especially on weekends and holidays when all the local annual passholders come out.  Don’t show up at a park expecting to get in without a reservation. They will turn you away.

Disney has introduced several new protocols to increase health and safety measures and reduce the risk of spreading the virus.  It’s not just about them cleaning everything all the time.

Social distancing is strongly enforced. There are empty rows and empty seats on attractions, and some restaurants, retail locations, and theaters are even closed completely especially where social distancing is not possible. They’ve placed stickers on the ground to show you where to stand, and they’re even parking cars in every other spot and filling in later to allow for social distancing when exiting your vehicle. There is also a new Social Distancing Squad, which consists of Cast Members wandering the parks reminding guests to stay distanced and wear their masks properly.

Disney has also employed temperature screeners from Advent Health to check the temperatures of every guest enter the parks.  They adjusted bag check desks in favor of (much more efficient) Evolv Technology security scanners for everyone, which does make the entry process pretty smooth.

Guests are also asked to use contactless payment such as Apple Pay or MagicBands. These were options prior to COVID, but they are now preferred.

Perhaps one of the most significant health and safety protocols Disney has implemented is the requirement that any guest two years of age or older must wear an approved face covering at all times in public areas. This includes parks, hotels, transportation, and any other Disney-owned property.

Originally, Disney said if you were eating or drinking, you could take it off; many guests found a way to circumvent this rule by having food and drink with them all the time. Disney modified their rule to say that you must now be stationary, and they do not consider standing a queue line to be stationary. You must also wear your mask while in photos. I’ve even heard stories of Disney removing a photo from a guest’s PhotoPass if there was anyone in the photo not wearing a mask.

Fortunately, Disney has made some relaxation stations available where you can remove your mask while not eating or drinking. These include locations outdoors, such as one in Frontierland and one at the Tomorrowland Terrace.

Many guests worry that face masks are uncomfortable in the Florida heat. While they do get hot in the summer, wearing them will be easier as the cooler weather sets in. I do suggest bringing several masks with you in case they get wet or dirty. It’s also a good idea to wash them before wearing them again.

Cast Members will actively enforce this rule – perhaps more than any other – and they will remove a guest from the park if they refuse to wear a mask properly. One guest even observed that a Cast Member told someone to put their face mask over their nose and when the Cast Member walked away, the guest pulled it back down.  Within minutes, a uniformed security Cast Member approached the guest, reminded her to wear her mask properly, and warned that he would be watching her.

Much of Disney World’s transportation has necessarily changed because of the requirement of social distancing. You definitely will not see buses packed to the gills as you did prior to 2020. Buses have marked seats for distancing, and there are a limited number of seats available on each bus.

No form of transportation is offering connecting services to other parks because, at least for right now, Park Hopping is not an option. Between-park transportation is not necessary. You should also be aware that there is no monorail service from the Transportation and Ticket Center to Epcot, so you’ll have to use a bus.

Disney has installed partitions between the cabins on the monorails.

Minnie Van service has been discontinued as well, and it’s doubtful that it will return – at least not anytime soon.

Not too long ago, Disney introduced mobile ordering. It was limited and spotty for a while, but Disney has since expanded its availability to most if not all counter-service dining locations.

It works pretty well now, and was actually much more convenient than waiting in line to order – pandemic or not!

Disney has temporarily discontinued some entertainment options that drew large crowds including fireworks and parades and those that required close contact with Cast Members like character meet and greets.

This is Disney, though, and they’ve created some really magical ways to experience Disney magic. There are now several smaller cavalcades that many say are better than the larger, longer parades. These cavalcades include some of your favorite Disney characters and some that are rarely seen. You won’t, however, get Goofy’s signature or get to hug Chip and Dale, so if this is something your kids look forward to, prepare them ahead of time.

Disney is experiencing some of the lowest crowd levels we’ve ever seen. While Florida has loosened restrictions, Disney is slow to follow. Even at 35% capacity, an estimated 31,000 people are allowed in Magic Kingdom on any given day.  EPCOT probably allows close to 40,000.

Many guests who have visited recently question whether Disney is actually operating at lower capacity.  The lines seem very long and the park seems very crowded.  However, you have to keep in mind that many queues have moved outside and the lines are now socially distanced – making them longer than ever before even with many fewer people. Some guests have even said that while the lines were physically longer than they’ve seen before, the actual wait time was much less than what was posted.

The lines can sometimes crisscross too, so be sure to look for a Cast Member holding the sign for your destination so you are sure you’re in the right line!

Because Disney has to keep such tight reigns on how many people are in the parks at a time and implement the additional safety protocols, they’ve had to temporarily suspend some convenience options we’ve come to love.

The whole FastPass system is shut down, and Disney is using all queue line space and then some to maintain distance between parties. When I first returned to Disney World upon reopening, the lines were very short, but as people are returning, the wait times are increasing. Arriving early is still your best option for keeping your wait times low.

Disney has also canceled all Extra Magic Hours and, generally, decreased overall park hours outside of holidays.  Still, with shorter waits, you can see and do a lot in a short period of time.  Plus, you have more time to enjoy other things after park hours – like visiting Disney Springs and exploring your Disney Resort Hotel.  Some guests have observed that Disney is opening their parks 30 minutes ahead of the posted opening time though.

Disney is not allowing Park Hopping at this time either. You may leave and reenter the same park more than once in a single day but you may not enter two parks on the same day.  If you purchased a ticket with a park hopper option, check with Disney Guest Services, and you might even get some money back.  Rumor has it that guests staying on property will be the first allowed to Park Hop again, though Disney has not announced anything regarding this.

If you approach a Disney vacation during the pandemic as a unique experience, knowing that it is going to be different from all of your previous trips, you likely won’t be disappointed. However, if you really enjoy live entertainment, nightly fireworks, and character meet and greets, you might be a little disappointed.  A trip to Disney World right now is different but still magical even if the magic is a little different– and it beats working any day!

Have you visited Disney World during the pandemic? Will you?