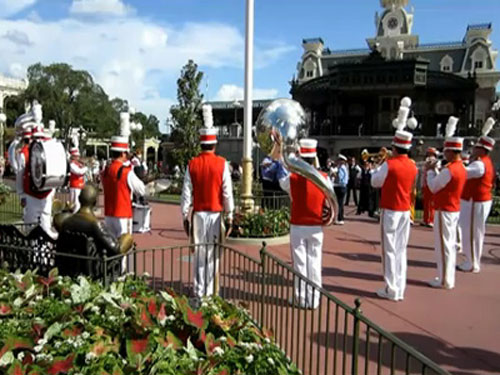 All About the Magic Kingdom Flag Retreat Ceremony

Many people visit the Magic Kingdom, but few stop to see the daily Flag Retreat Ceremony at 5 p.m. in the center of Town Square. For all Americans, especially military veterans, there is great meaning to this ceremony.

“Retiring of the colors” is a serious and formal show designed to show proper reverence to the flag and the United States of America. It is scheduled to take 15 minutes – expect it to take only about ten minutes.

Each day, a “Veteran of the Day” is given special honors and receives the folded flag after it is lowered. You’ll observe many veterans in the crowd, many wearing a hat or other symbol indicating where they spent time in the service. You invariably see them saluting the flag during the ceremony, to offer proper respect to the country.

Considering the importance of the flag lowering. Anytime a flag is raised or lowered is a somber, patriotic time. Many people simply walk past without regard to the importance of lowering the flag because they don’t realize the proper etiquette they should follow.

On special days, like Independence Day (July 4th), Cast Members who are also military veterans are called down to take part. You may also witness high school marching band performers or even military jet flyovers on special holidays!

Any citizen taking part in one of these ceremonies finds them to be moving experiences and become filled with a sense of patriotism. Like the American Adventure attraction in Epcot, you are bound to see older men and women and veterans from WW II, Korea and Vietnam leaving the experience wiping tears from their faces. It is hard not to get goosebumps during the experience which is filled with Patriotic Magic.

Veterans Day and Memorial Day is when we give thanks to our brothers and sisters who have given service to the country and to those who sacrificed all.

Have you seen the Flag Retreat Ceremony on Main Street USA?