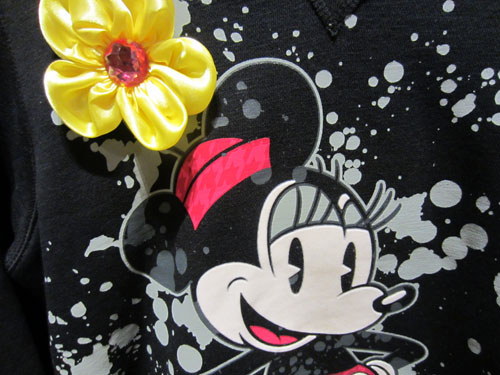 Disney characters are a beloved part of our society. Mickey Mouse is everyone’s pal, and we love to love his girl, Minnie Mouse, his dog Pluto, and his friends Goofy, Donald, and Daisy.

Since Walt Disney began making animated films in 1921, each new short and movie has given us more characters to enjoy.

Recently, a young woman and her friend were planning a trip to Disney World, and they decided to create outfits inspired by Disney characters. They called it “DisneyBound” because they were literally bound for Disney, but it’s become so much more.

Now, people are DisneyBounding all the time.

In order to understand this new trend, we need to take a look at similar attire choices as well as rules for dressing in the parks.

For the most basic way to show your love for a Disney character, fans can wear a t-shirt with the character on it or maybe some accessories or a pin displaying the character or something from the character’s movie.

It’s fun to wear Disney t-shirts, and expressing your love for a certain character especially while you’re in the parks is a special way to enjoy your vacation.

Cosplay, as it’s called, is short for “costume play.” This is the complete antithesis of wearing a Disney t-shirt.

Cosplayers dress up in a character’s costume and pretend to be that character. They even interact with other cosplayers to create a subculture off the stage. The best way that this can be described to those who are completely unfamiliar with the trend is to imagine the Comic-con conventions where people dress up as everyone from Star Wars’ Darth Vader to Pokemon’s Pikachu.

Cosplay is definitely not limited to Disney characters, and it usually takes place in or around an appropriate location like a convention. It presents obvious issues in Disney World where guests could get confused as to whether the cosplayer is a fan or a character employed by Disney, so you won’t see this kind of dress-up in Disney World unless the character is a Disney employee.

DisneyBounding is a new trend somewhere between wearing a complete costume, which isn’t allowed in Disney World, and wearing a basic t-shirt. It’s the perfect compromise for adults who are still kids at heart.

When you are DisneyBounding, you wear regular clothes that you would find in your own closet already or that you can buy at any clothing store. The twist is that you create an outfit inspired by a Disney character, film, or attraction.

Without using any costumes or props, you put everyday clothes together to give a nod to your favorite Disney character.

If you and your significant other are traveling to Disney World and you want to DisneyBound, the lady can wear a red skirt with polka dots, a black shirt, and a red bow in her hair while the gentleman can wear red shorts and a black shirt. The best thing about DisneyBounding is that you can throw in some of your own style, so for this DisneyBound, consider wearing Chuck Taylor shoes to complete the outfit. While your outfits are inspired by Mickey and Minnie Mouse, you won’t be dressing up in full costume.

Let’s try another one.

If The Little Mermaid’s Flounder is your favorite fish in the sea, throw on some yellow jeans, and try to find a yellow and blue shirt. Flounder supports Ariel unconditionally, so adding an Ariel Pin or some of her trinkets as accessories would be a great way to add detail.

For the Little Mermaid herself, instead of going full-on costume with tail and all, get some green jeans, a purple top, and some seashell earrings. If you can get a fork to stay in your hair, you get a bonus point!

For the Genie in Aladdin, a blue jumper for ladies or blue jeans and blue top for guys with a red belt would be perfect. Some gold bracelets would be a good accessory for Genie. You could even wear gold magic lamp earrings and a top knot.

Characters aren’t the only DisneyBounding option, though. You can dress in clothing inspired by attractions too. If It’s a Small World is your favorite attraction, consider finding leggings with bright colors and geometric shapes like the ones that Mary Blair used in the attraction. A white shirt with a clock face would go well with this, and there are more potential accessories than I can even imagine. Globe earrings, bracelets with flag charms from all over the world, fun cultural hats, and so much more. The possibilities are endless!

In order to make the best DisneyBound outfit you can, it helps to have an eye for style trends and details. Since you’re not dressing in the character’s costume, adding subtle details, like the fork in the hair for Ariel, will help passersby identify your DisneyBound.

Here are three basic guidelines to help you in your creation:

While you do have a lot of freedom when creating your DisneyBound, you need to consider the Disney Parks’ dress code and not do anything that would prevent your entry.

As I mentioned, no Disney Parks guest over 14 years of age is allow to wear a costume or a mask in the parks (unless it’s for medical reasons). Clothing shouldn’t have any objectionable material, and no excessively torn clothing is allowed either. If you want to DisneyBound as Cinderella before her transformation for the ball, make sure your clothing isn’t too torn since it can get caught in ride vehicles and be dangerous.

Fortunately, Disney has embraced DisneyBounders, and you’ll probably draw some attention in the parks at least from other guests who “like your outfit!”

Have you heard of DisneyBounding?  Ever tried it?