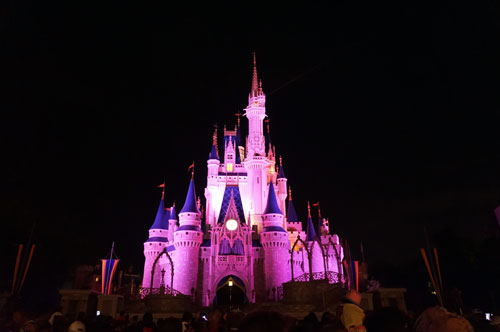 What Happens in Disney World at Night?

You may have never thought about it before: Have you ever wondered how the parks always look so perfect?

Question no more because I have the answer!

As guests are funneling out of the park after a fun-filled day of Disney excitement, hundreds of Disney Cast Members are moving in to clean up, restock, repair, replenish, and bake so the parks are again perfect for the next day.

Since the parks are usually open late into the evening with Magic Kingdom being open the latest and sometimes the earliest the next day, these Cast Members have a very limited time to complete their very specifically assigned jobs.

Now, let’s take a look at some of the things that happen at night in Walt Disney World Resort!

Before anything else happens, Disney does a security sweep to make sure no stragglers are left behind. It’s not uncommon for people to try to hide out in the parks overnight, but Disney Security knows the popular hiding spots, specifically on Tom Sawyer Island, and they will find you and escort you out.

Each year, Disney plants millions of flowers, shrubs, and roses to make the parks beautiful. This includes 13,000 roses, 3,000 hanging baskets, and 250 topiaries. The Mickey topiaries are trimmed and shaped every Monday to make sure every angle of every picture is perfect. The other plants are trimmed and watered daily.

What’s more, the grass is mowed every Monday, Wednesday, and Friday. It’s also watered and fertilized to keep it looking green all year.

Some Disney Cast Members are dedicated to maintaining all of the rides and attractions to keep them working smoothly and safely. All of the rollercoasters, ride vehicles, tracks, and conveyors are checked for any defects. If anything is found, it is repaired immediately.

All of the audio-animatronics also have to be checked. In the Enchanted Tiki Room alone, there are 225 moving, talking birds, plants, and other characters. Engineers must watch the show several times to make sure that each and every one is in tip top shape.

Firefighters sweep the parks every night checking fire extinguishers, fire alarms, and sprinkler systems. Again, if anything is malfunctioning or needs to be replaced or repaired, they do it on the spot.

Disney also has scuba divers who are dual certified in scuba and things like electrical and mechanical engineering to check anything mechanical or electrical that happens to be underwater. They put on their wet suits, dive into the (sometimes very cold) water, and check underwater tracks, underneath vehicles, and the animatronics that reside under the water.

Have you ever wondered how the shelves stay stocked in all of the shops? Well, of course they have to do some restocking during the day, but most of it happens at night. If anything needs to be torn down or reset, this has to be done after park hours.

There are around 35,000 different items that guests can purchase as souvenirs, and the Disney Cast Members work overnight to keep them stocked, straight, and dust-free.

While the Disney Cast Members do work during the day, and often right in front of guests, to make the delicious treats you love to snack on, they make a lot of these sweets at night.

In the Main Street Confectionary and Main Street Bakery, the Cast Members are busy making the 1.9 million candy and caramel apples and the 3.5 million ice cream bars sold annually.

Other Cast Members prep their kitchens for the 60 million meals served every year.

All of the cleaning and regular maintenance is left to the custodial staff. They repair hundreds of umbrellas, thousands of chairs and tables, and use 700,000 gallons of bleach every year to keep everything clean, sanitary, and looking great.

They refuel the gasoline-powered attractions including the Liberty Belle, the Tomorrowland Speedway cars, and the Tom Sawyer Island rafts. They use pressure washers to clean spills from the sidewalks, and they make sure garbage cans are emptied and ready for the next day.

Interestingly, the Imagineers tell the cleaning staff just how “clean” something should be. For example, cob webs and dust are often ignored in The Twilight Zone Tower of Terror for effect. After all, it is supposed to be an old, abandoned hotel. The dust just adds to the spookiness.

You’ve probably heard the rumors about the feral cats living in Disney World to control the rodent population. This is absolutely true. Disney veterinarians spay and neuter the cats to control their population, and they help by eating the rats and other small rodents that frequent such areas.

Disney sprays for other pests, but they do allow and even encourage some non-poisonous snakes, including Black Racers, to live and thrive on property. These snakes also work to control the rodent population.

Even though many people don’t need much encouragement to visit Disney World, they still have to market their brand, and one way they do that is through commercials. To prevent interfering with the paying guest’s experience, these commercials are filmed during off-hours. This also allows Disney to control not only the foreground of the commercials but also what’s going on in the background. They’ll carefully place actors, plants, characters, etc. to make the scene just right.

If you’ve ever been to Disney during a holiday season, you know that they go all out on decorations! Probably the most amazing thing that’s ever happened to me in Disney is seeing a before and after in Magic Kingdom.

I visited Magic Kingdom one day and arrived at rope drop the next day only to find that the park had been completely transformed into a lovely fall atmosphere with colorful leaves, fall mums, and pumpkins everywhere. There were even Mickey pumpkins on all of the lampposts on Main Street USA.

To make this happen, Disney brings in even more Cast Members for these special nights. They come in and decorate after the whole park has been cleaned and maintained. Their whole job is to wow guests the next morning. It’s pretty effective!

Would you want to see what happens at Disney World  after-hours?