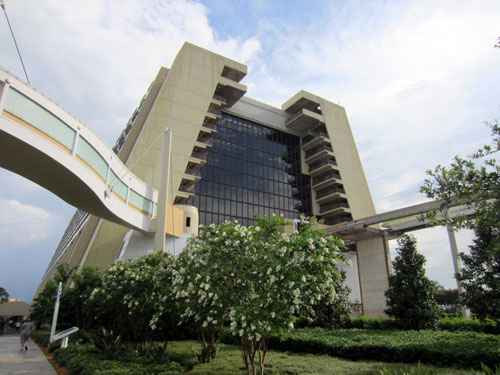 Picture this: you’re sitting on a bus headed for the Magic Kingdom or Epcot and you overhear a conversation a few rows away. Other passengers are talking about something involving the Disney Company or the theme parks that just seems too bizarre, too weird to be true. So you start asking yourself, is that a true story or is it a Disney urban legend that has been passed down for years?

If you’ve ever been on the Haunted Mansion in Disneyland or Walt Disney World, you’re familiar with the Ballroom Scene. In it, your Doom Buggy rides past a huge ballroom where ghosts appear and disappear below. It’s one of the oldest and coolest effects in all of the Disney parks.

What’s not so obvious about the effect is that there is an actual giant piece of glass in front of you where the ghosts are appearing. On Disneyland’s version, however, there is a very obvious spider and spider web etched into the glass, making the illusion seem a little off. Why are they there?

Well, according to those in the know, either a kid with a slingshot or someone with a gun shot at that glass, leaving a very large crack behind. Since the panes of glass were installed before the Haunted Mansion was finished, it would make it extremely difficult to remove to cracked pane. So, in order to conceal it, Disney added the spider and web to the glass!

One thing that has always separated the Disney theme parks from others around the world is their cleanliness.

As a matter of fact, as a former Custodial Cast Member, I still take great pride in how clean the parks are. I’ll actually pick up trash still when I see it on the ground because I was trained to do that when working for the mouse!

As a cast member you are supposed to pick up any trash (reasonably, of course) that is on the ground. This all goes back to Walt Disney and his meticulous planning of Disneyland. He studied guests’ behavior and calculated that the maximum number of steps a guest would walk while holding trash was about 30. Then if there wasn’t a garbage can around, they would drop that trash on the ground. That’s exactly why you’ll never find a garbage can more than 30 feet from you at any time in the Disney theme parks!

3. Richard Nixon and the End of the Beatles

Did you know that Richard Nixon gave his famous “I am not a crook” speech from Disney’s Contemporary Resort? That’s a true story! Also, John Lennon signed the papers that officially put an end to The Beatles while on vacation in Walt Disney World. He actually signed the contract while staying at the Polynesian Village hotel. So who knows, you may have even stayed in the room that marked the end of the most famous band of all time!

2. Frontierland Had A Real Shooting Gallery

You read that correctly! When the Frontierland Shootin’ Arcade first opened in the Magic Kingdom, the guns that were used shot actual lead pellets at their targets! Could you imagine that today?! Eventually, the guns were converted to work with infrared sensors in order to save the Disney Cast Members the chore of repainting the targets each and every night after the Magic Kingdom closed.

1. The Wizard of Bras

When Disneyland opened in 1955, Main Street USA was very different than it is today. The stores along Main Street included a pharmacy, a clock shop, a tobacco store that sold cigarettes, cigars, pipes and all different types of tobacco, and an intimate apparel shop that was known as the Wizard of Bras. While the shop was only in operation for a little more than a year, it’s fun to take a look back and see just how different Main Street USA was originally intended to be!

Did you know you could once buy cigarettes and bras on Main Street USA?