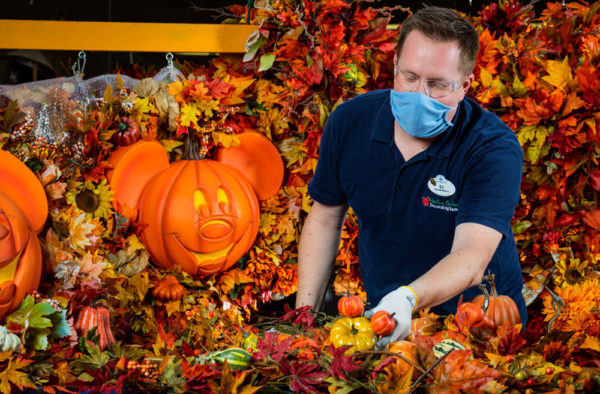 In this edition of the Weekly Disney Round Up: a favorite Disney treat makes a return, more COVID-19 precautions are added to the Parks, we now know when to expect ome spooky decor, and a new store opens in Disney Springs. This is your Disney news for the week of August 22, 2020.

Governor DeSantis Open to Theme Park Expansions: Florida Governor Ron DeSantis held a roundtable meeting titled “One Goal, One Florida” on the grounds of the Universal Orlando Resort. During the meeting, DeSantis said that the government of the state of Florida was comfortable with expanding the guest capacity of theme parks in Central Florida, including both Universal Orlando and Walt Disney World.

Social Distance Markings Added to Main Street USA: Tape and markers have been added around the streets of Main Street USA in order to adhere to best practices for COVID-19. The goal is to assure that guests gathering for cavalcades have enough space between each party.

Cheshire Cat Tails Have Returned! Some good news! After some digging on Walt Disney World’s smartphone app, My Disney Experience, we found that the Cheshire Cafe Cat Tail can now be found at Cosmic Ray’s! Cosmic Ray’s is the main quick service restaurant in Tomorrowland and located directly across from Cheshire Cafe.

Save The Date! September 15th Halloween Comes to Disney: While Disney will not present Mickey’s Not So Scary Halloween party this year, they have announced a new approach to celebrating Halloween at the Magic Kingdom. The celebration will include new decorations, merchandise, treats, and a new Halloween Cavalcade.

The VOID to Remain Closed: It is now believed that The VOID will remain closed even after Disney Springs has fully reopened. Although some online sites point to difficulties from COVID-19 as the reason for the closure, the Downtown Disney (Disneyland) VOID location had to shut their doors due to licensing issues. Guests who visit The VOID’s official website will find a letter stating the VR experience is still temporally closed for safety purposes.

Permits Filed For EPCOT’s “Project G”: Fans of EPCOT have even more reason to get excited. Permits for “Project G”, assumed to be a part of “Project Gamma”, have officially been filed. The new permit is said to be for providing labor and materials for construction. At this time, there is a gaping hole where the Innoventions buildings once sat and construction walls standing at every turn in Future World. “Project G” hopefully signifies that the construction zone of Future World is only for a very limited time.