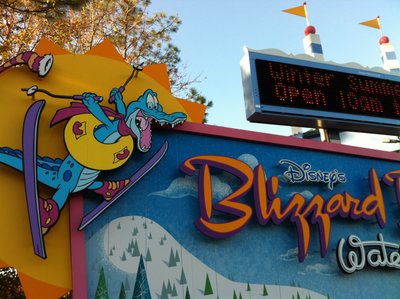 Walt Disney World, situated in sunny central Florida, benefits from a very generous amount of warmth all year round. It’s no wonder that the water parks at Disney are so popular with tourists here, and that Disney’s invested significantly in them. The best way to figure out which is the best is probably to try them both!

There are two Disney World water parks. The first is Typhoon Lagoon, a tropically-themed water wonderland with lots of wet and wonderful thrills that the entire family can enjoy.  Of course there are the obligatory water slides for thrill seekers as well as tamer areas tailored for the youngest among us.

There are also some pretty unique attractions like Shark Reef, where in conjunction with NAUI, an international scuba training and certification organization, visitors can safely snorkel with all manner of underwater friends, including two species of non-aggressive shark! Onsite, there are snorkels, masks, flotation jackets and any other safety gear that a young explorer could need for free. The adventure optionally continues when guests opt to strap on tanks and explore deeper waters (under supervision, of course). Naturally this attraction, like all others in the park, is marked by a serious commitment to visitor safety.

Surf Pool is a world-class wave pool with six-foot high waves for the wild seawater aficionados and much calmer waters at the other end of the pool for people who are into a more relaxed kind of adventure. If the tall waves sound dangerous, any worries can be alleviated by the constant presence of a small army of lifeguards who are ever watchful.

Another big draw at this resort and at many other area water parks is the lazy river called Castaway Creek where guests of all ages can take a leisurely float on an inner tube. Or why not grab the whole gang and ride in a huge family-size inner tube down Gang Plank Falls, Typhoon Lagoon’s exciting-but-reasonable tubing experience a step up on the thrill meter from the not-so-raging waters of Castaway Creek. Gang Plank Falls is in the same neighborhood as Keelhaul Falls, a single-rider inner-tube waterslide for bigger kids, teens and adults, and Mayday Falls, the longest raft ride at Typhoon Lagoon. Mayday Falls starts guests out under a marooned shrimp boat and quickly sends them plummeting down a turbulent simulated waterfall, complete with cave action! This is the most intense of all three of the tube rides, so Disney lifeguards are extra vigilant here.

Kicking it up another notch is the Crush ‘n’ Gusher, where jets of water (not just gravity) propel two- to three-rider rafts down a slide with daring turns and a section that even goes upward, lifting riders up the slide with powerful streams of water before splashing down into Hideaway Bay.  The number of guests riding each raft corresponds to the particular course that the raft will follow: if going it solo or with a friend, the rider descends the Banana Blaster. Three riders on one raft can only use the Pineapple Plunger path and Coconut Crusher course—but they’re happy to get to do so!

Disney’s other water park is Blizzard Beach, whose theme is a bit different from Typhoon Lagoon’s. It’s fashioned to look like a classic ski resort blanketed in snow, with the emphasis placed on really tall waterslides that take a chair lift to ascend. But, there’s a good distribution of thrilling versus more relaxed rides, so the timid and the very young among us have nothing to fear. There are even teency weency versions of the large waterslides in the kiddie pool!

The attractions at Blizzard Beach are really amazing. For starters, there’s Toboggan Racers, where visitors speed down a multilane waterslide on mats that look a bit like sleds. We’ve all seen this kind of slide at traveling carnivals, but Disney took it a step further by adding a cascade of H20 to it and adapting it to the water park venue.  Toboggan Racers is part of the three Mount Gushmore attractions, which also includes Downhill Double Dipper and Snow Stormers. Snow Stormers itself has three waterslides over three hundred fifty feet long and visitors like to try and beat each other to the bottom on the same sled-like mats they use at Toboggan Racers. Also, like that ride, this one is geared toward the larger kids, teens and adults and has strict height and weight requirements, lest we forget the focus on safety that’s paramount at Walt Disney World! Downhill Double Dipper is like a cross between the two. Water revelers hop aboard a soft inner tube and into a wide waterslide that’s a thrilling straight shot to the bottom. At three hundred fifty feet in length and at a height of fifty feet, this attraction propels riders to the bottom at speeds of up to twenty-five MPH!

All about the park is a lazy river called Cross Country Creek. The attitude towards lines is as relaxed as the river itself; guests can hop on just about anywhere by simply grabbing an inner tube from any of the receptacles and hopping on in. Another fun-drenched bit of safe, relaxed fun for the young ones at the heart of Blizzard Beach is Tike’s Peak. This wee water world is a scale-model bit of fun for those among us who don’t quite make the height requirements of the grown-up rides. In fact, it has its own height requirement so that things don’t get out of hand: no more than four feet of park-goer is allowed here!

The other side of the coin is Summit Plummet, North America’s tallest waterslide at a height of over 120 feet! Guests over four feet tall thrill to this 350-foot waterway, which rockets them down to a pool at the bottom where a digital readout indicates their speed. Many have been clocked at upwards of sixty MPH! Though the speed is elevated, Disney of course places a lot of emphasis on the safety of the visitors so they can continue to enjoy this watery wonderland free of incident.

Check Before You Go

Disney does shut down its water parks for extended periods during the colder months – although one park is almost always open as long as weather cooperates.  Be sure to check out the official Disney water parks web site for operating hours before showing up in your swimming suits and being disappointed.