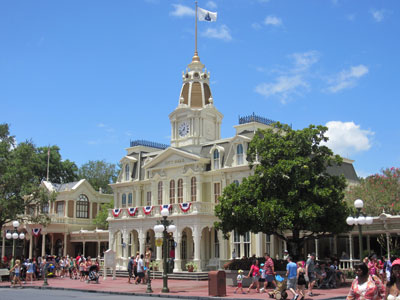 We all know that Disney World presents an idealized view of the world.

If you consider the various scenarios for what the future holds, Disney offers Tomorrowland which provides you with sleek transportation and humorous aliens. Compare this to something like the movie 1984 where the government spies on you constantly, or the movie RoboCop, where the future Detroit is a mess.

If you consider the various options for having an adventure, Disney offers Adventureland, which provides you with jolly pirates and singing birds. Compare this to something like a real adventure, say a trip to the desert, which, in reality, makes you face dangerous animals and the possibility of deadly diseases.

If you look at small town America at the turn of the century, Disney offers Main Street USA, the gateway to the seven themed lands of the Magic Kingdom! How does that compare to how a real Main Street may have looked when Walt was a kid?

Let’s compare Disney’s presentation of Main Street in Disney World to what you might have seen in a real main street at the turn of the century.

The Main Street that guests visit in the Magic Kingdom has some wonderful qualities. Just a few of them include:

Walt Disney World’s Main Street is wonderful, and it actually has quite a few things in common with actual small town Main Streets of the early 1900s, but, it has some differences too.

Personally, I am glad that the Main Street I so enjoy at Disney World took its inspiration from the turn of the century America, but to that it adds in modern conveniences like Disney characters, orderliness, and cleanliness. It makes for a Main Street that is fun to visit, and probably one that is different, and dare I say better, than the original versions.