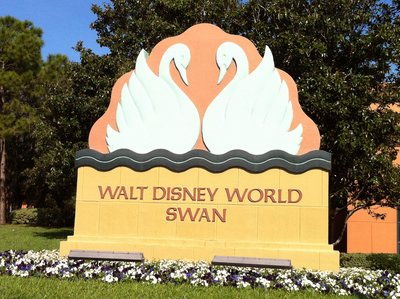 From the 47-foot tall swan statues atop the roof to the elegant swan boats for paddling around Crescent Lake, the Swan Hotel makes itself known to everyone who comes within sight of it.

The Swan is one of two hotels that form the impressive Walt Disney World Swan and Dolphin Resort. The architect and visionary Michael Graves, who has received many awards and accolades for his work, designed these unique buildings, which are opposite one another as they back onto the half moon of Crescent Lake.

Although they sit on Disney World property as a part of the Epcot Resort Area, the Swan and Dolphin are owned and managed by Starwood Hotels and Resorts Worldwide. The Swan and its sister hotel cater primarily to conventions and large conferences, but during times when conventions are not in possession this beautiful and expensive hotel and resort can be a great place for Disney vacationers, and a relatively inexpensive one as well – at least when compared to the prices at other Disney luxury resorts.

Since the Swan is owned and operated by a third party, it is able to offer discounts that cannot be found through Disney itself. While Disney has its own slow and busy seasons, the Swan and Dolphin revolve around the convention crowds and may have rooms and lower prices during times when the other Disney World resorts are at their most expensive. Convention-free times are also the times when most Disney World guests would prefer to stay at these hotels, since it allows them to avoid the crowd and enjoy their Disney vacation with like-minded guests.

In addition to the price of a room at the Swan, there is a mandatory resort fee for all guests at the Swan and Dolphin resort. For guests whose sole priority is spending every waking hour at the Disney theme park, staying at the Swan and paying this fee for the many wonderful features of the resort may not make sense. However, for guests who plan to spend many relaxing hours enjoying their temporary resort home, the Walt Disney World Swan has a great deal to offer.

The numerous services and amenities of this hotel include quite a few options for casual and fine dining, as well as enjoying a relaxing beverage. Better still, many other options can be found a short hop away at the Walt Disney World Dolphin.

Kimonos is the place to eat for fine Japanese cuisine, including sushi that the Orlando Sentinel critics have named the best in the Orlando area. The spare and beautiful setting full of dark teakwood helps to make this an exceptional dining experience.

Located next to the Swan’s lap pool, the Splash Grill is a very informal place to enjoy a slice of pizza, a burger, or other American food favorites while luxuriating in the sun between dips into the cool water.

If you simply want to enjoy and invigorating morning coffee or a relaxing evening drink, there are a couple of options at the Swan. For coffee or a fresh pastry, stop by the Java Bar. For drinks and exuberant karaoke, try the Kimonos Lounge, which is open nightly beginning at 5:30pm.

The Grotto Pool and Other Recreation

The centerpiece of the recreation opportunities at the Swan and Dolphin Resort is the impressive Grotto Pool complex, with its waterfalls, rocky caves, and tropical vegetation. The long and twisting pool covers half the distance around Crescent Lake between the Swan and Dolphin hotels. The complex also has a kiddie pool and several hot tubs, in addition to the lap pools that sit next to both hotels.

There is a children’s playground next to the Grotto Pool, and in front of the pool is the beautiful white sandy beach of the lake. Sunbathing and volleyball are a few of the activities that guests can enjoy on the beach.

The resort also has tennis courts and basketball courts, as well as a jogging trail that loops Crescent Lake. Guests in need of their daily exercise can also take advantage of the fitness equipment at the Swan health club.

Additional ways for guest to entertain themselves include the Fantasia Gardens and Fairways Miniature Golf Course, a variety of boutiques for shopping, and rental boats for exploring Crescent Lake.

Two of the primary reasons that Disney vacationers choose to stay at an on-location resort instead of one of the many other hotels and resort in the Orlando area are the convenient location and the benefits and services to which you have access as a Disney guest.

The Walt Disney World Swan certainly offers its guest this first advantage. The location of the hotel between Epcot and Disney’s Hollywood Studios places it right in the middle of the action. This central spot allows convenient access to all other parts of the Disney World resort.

Perhaps more surprising is the fact that this non-Disney owned hotel also provides its guests with many of the same advantages that are available only to guests who stay at Disney resorts. These benefits include complimentary transportation to and from the Orlando airport, free travel by bus or boat to all other parts of Disney World, and additional hours at the Disney World theme parks via “Extra Magic Hours” where resort guests have exclusive use of  the Disney parks before or after normal operating hours.

Is the Swan a Good Choice For Your Vacation?

The Walt Disney World Swan is not the classic Disney World resort experience, but that may be part of the appeal for some vacationers. The Swan and Dolphin give bargain hunters the chance to secure a deluxe resort at a great price between conventions.