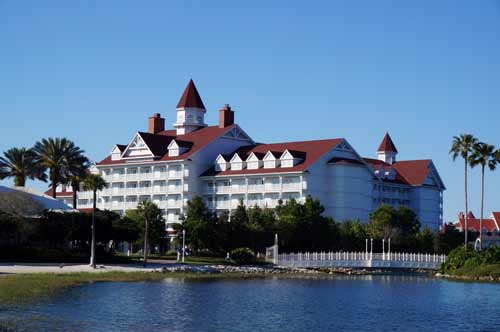 Walt Disney World Resort is committed to accommodating their guests, and they know that runners are diehard. Beyond their eight runDisney events every year, they have also added trails to each of their resorts. Whether you’re a serious runner preparing for a full marathon or just out for an evening stroll, these paths are sure to delight.

Disney’s Animal Kingdom Lodge has many trails that are good for walking and running.  They are surrounded by lush greenery and give you nice views of the resort.

Disney’s All-Star Movies, Music, and Sports Resorts have a 1-mile paved jogging trail connecting the three popular Value Resorts. This is a great way to see all three resorts regardless of which one you are staying at. Since all three resorts are uniquely themed, this will be an exciting jog. Enjoy the differences at each resort.

Disney’s Coronado Springs is also home to a great running trail. At 0.75 miles, the promenade loops around Lago Dorado offer scenic views of the lake. If you need a little longer running path, venture out into the villages. The Ranchos and Cabanas have some great wetlands areas where you’ll be joined by some wonderful wildlife.

There are several hotels around Epcot, and each one has its own great running trail, but many of them join together for an even longer trail.

For example, Disney’s Boardwalk Inn and Villas and Disney’s Yacht and Beach Club Resorts each have their own jogging paths around Crescent Lake and the resorts themselves. However, there is an extensive running path both on Epcot Resorts Boulevard and Buena Vista Drive that extends almost to Hollywood Studios! These paths are customizable depending on the distance you would like to run and can be anywhere from just under a mile to three miles depending on your route. One more thing: these paths are especially beautiful in the morning sunrise!

In addition to the resorts mentioned above, Disney’s Caribbean Beach Resort has a 1.2 mile promenade around Barefoot Bay, and Walt Disney World Swan and Dolphin Hotels have a 0.8 loop around Crescent Lake, but guests can find routes up to four miles.

The Magic Kingdom Area Resorts have great views of the park, and one of the best ways to enjoy these views is to use the woodland trails along the Seven Seas Lagoon.

Disney’s Contemporary Resort has a path just under a mile around Bay Lake Tower and South Garden Wing. The nearby Fort Wilderness and Wilderness Lodge Resorts host some of the best trails in the resort. The rustic, wooded trails between the two resorts extend up to 2.5 miles.

The jogging trails around Disney’s Grand Floridian Resort & Spa and Disney’s Polynesian Village Resort are also beautiful mostly because of the magical views of Magic Kingdom and especially Cinderella Castle. Each resort has a one-mile trail, but if you connect the two resorts, you can run up to two miles. As you run, enjoy the views of Seven Seas Lagoon and Disney’s wedding Pavilion.

Disney’s Port Orleans Resort is the only resort with two distinct sections: Riverside and French Quarter, but the 1.7 mile jogging trail connects the two via the Sassagoula River.

runDisney hosts eight events each year that allow guests to literally run through the parks. Each event takes place before park opening, and there are various distances and themes. If you’re considering participating in a runDisney event, using the trails above can be a great way to train to run in the Florida heat and to continue training for the event once you’ve arrived.

To find these running trails, simply look for the New Balance Running Trail signs or ask the front desk for a map.

Do you run while on your Disney vacation? Favorite trail?