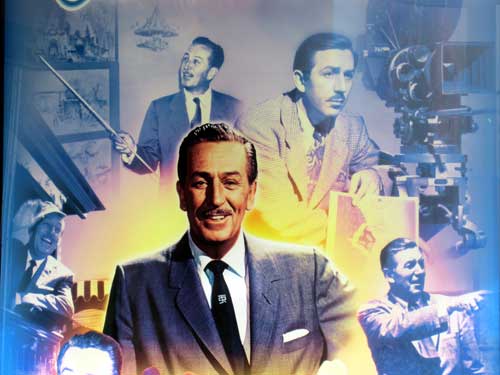 Four Quotes From Walt Disney That Will Change Your Life

I pride myself on being a bit of an amateur Disney historian (or nerd, fine, we’ll use your word). I have a large bookcase at home full of Disney books, most of which I’ve read more than once. I love reading about all things Disney: the parks, the movies, the rich history and cast of characters; but the one character that I’ve read the most about is the one who started it all, Walt Disney.

The man behind the mouse was born in 1901 in Chicago, Illinois, raised for a part of his life in the small town of Marceline, Missouri, and went on to become one of the most influential Americans ever.

Walt Disney never even graduated from high school, but his list of accomplishments and achievements is truly astounding and legendary. Throughout his life, he proved time and time again that with Imagination, patience, hard work, and dedication one could accomplish almost anything.

He also wasn’t shy around interviewers and gave some fantastic advice over the years. Here are some Walt Disney Quotes That Will Change Your Life.

All the adversity I’ve had in my life, all my troubles and obstacles, have strengthened me. You may not realize it when it happens but a kick in the teeth may be the best thing in the world for you.

By 1928, Walt Disney and his studio had their first big hit character on their hands, Oswald the Lucky Rabbit. In the Spring of that year, a young Walt Disney traveled from California to New York to talk to his producer, Charles Mintz, about renegotiating his contract. Mintz wasn’t interested. In fact, Mintz told Disney: “You know what, I’ve already hired every animator away from your studio except for Ub Iwerks. And you know your prize creation, Oswald? Well, I own him. You don’t have the right to make any more Oswald pictures without me.” At least that’s how I’d like to think the dialogue went down, but the story is still the same.

Walt was out of a job. So what did he do? Did he file for unemployment? Did he sulk the whole train ride back to California? Did he trash his hotel room?

Walt Disney took the train ride home to (according to legend) come up with his next great character, Mickey Mouse, and the rest is history! Sometimes that kick in the teeth is all you need, after all!

It’s kind of fun to do the impossible.

When Walt Disney set out to make the first full-length animated film, Snow White and the Seven Dwarfs, his critics thought he was insane. “Who would sit through a feature-length cartoon?” they said. The film they called “Disney’s Folly” went on to become the highest-grossing sound film ever.

Similarly, when Walt (I think I can call him that; he liked to be on a first name basis with everyone) decided he was going to go against all odds and create the world’s first “theme park,” most people, especially in the amusement park business, thought he was nuts. Even his wife, Lillian, told him that she thought those type of parks were dirty, unsafe environments. But Walt Disney did what he always did. He risked everything, even when everyone thought he was crazy, to make Disneyland a reality. The original theme park just celebrated it’s 60th birthday, and judging by the announced addition of Star Wars Land, it’s not slowing down anytime soon.

I think there’s a good lesson in this quote. If you truly believe in something, fully, and know in your mind and heart that you can make it work, then go for it.

If Walt had listened to his critics every time they didn’t like one of his ideas, we wouldn’t have Disneyland or Walt Disney World and who knows where animation would have gone?

A man should never neglect his family for business.

This one sounds like it was said by Michael Corleone, but it is actually another great Walt Disney quote.

Walt Disney was a very busy husband and father, often working late into the night at his studio in Burbank or at Disneyland in Anaheim. He never brought his work home with him, however, and made sure to carve out a day each weekend to spend with his daughters, which they would refer to affectionately as “Daddy’s Day.” He often would sit on a bench in Griffith Park in Los Angeles while his daughters were riding the carousel. It was on that very bench during a “Daddy’s Day” that Walt came up with the idea that would become Disneyland.

I love this quote because I’ve been guilty of doing this myself, and sometimes I realize that I have to reel myself in a bit and shut down the laptop, shut off my phone, and sit down in the middle of a work day and play Star Wars with my son or Barbies with my daughters. They won’t be little forever and as important as my job and career are, nothing is more important to me than my family.

The way to get started is to quit talking and begin doing.

Walt Disney was quite the talker, but he was also much more of a doer. At the age of 16 he dropped out of high school and attempted to join the U.S. Army during World War I, eager to do his part and serve his country. He was rejected because he was underage, so he later joined the Red Cross at 17 (still underage) and was sent to France for a year to drive an ambulance right after the war had ended.

During the summer of 1923, a 22 year old Walt moved to California (after his Kansas City cartoon studio went bankrupt) with next to no money to start his own cartoon studio in Hollywood.

Walt Disney didn’t sit around and wait for things to happen or hope for opportunities to arise. He went out and made things happen. Sure he had some bad luck and failures along the way, but ultimately he proved that “if you can dream it, you can do it” (another famous quote often falsely attributed to Walt Disney).

Walt became an icon and a legend not because he made a lot of money or because he earned roomfuls of awards and accolades (both of which he ultimately did), but because he didn’t let his challenges and adversity doom him. He stopped talking about it and just went out and did it!

Did these Walt Disney quotes change your life? Even if they didn’t, I hope this article gave you a bit of a bigger look at a man that changed the entertainment world forever.

Walt was far from perfect but he truly was a very inspirational human being. It seems like whenever someone told him something could not be done or was a bad idea, he set out to prove that person wrong. Walt Disney was a man with strong convictions. He was a man who knew deep down what he was capable of and went out and showed the entire world.

It may have “all started with a mouse” according to Walt, but to everyone else, Walt Disney is the one who was responsible for the future and continued success of the Disney Company.

Are you inspired by Walt Disney, the man?