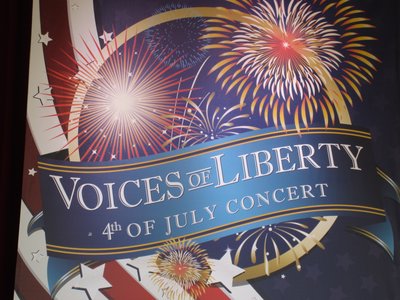 The Voices of Liberty performed several shows on July 4 in the America Gardens Theatre, directly across the World Showcase promenade from The American Adventure pavilion.

The show lasted about 30 minutes and contained plenty of patriotic music, including songs like America The Beautiful, The Battle Hymn of the Republic, I’m Proud To Be An American, Golden Dream, Taps, the military branch theme songs, and The National Anthem / The Star Spangled Banner.

At the end of the show the Spirit of America Fife and Drum Corps marched in with patriotic editions of Mickey Mouse, Goofy, and Donald Duck.

You could feel the pride for country in the audience, with generous doses of thankfulness and respect.

Let’s take a look at a video the full show:

What do you think about this Voices Of Liberty show?