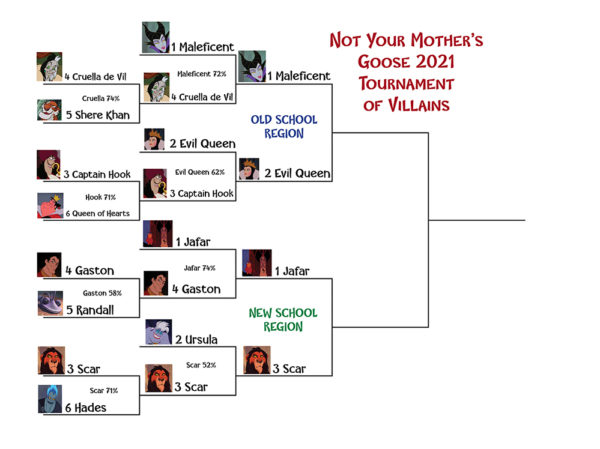 And then there were four.

The “Tournament of Disney Villains” from the Not Your Mother’s Goose podcast created by World of Walt contributor Topher Goggin has reached the semifinals. World of Walt readers have been instrumental in the voting, and over 800 votes have now been cast through two rounds.

Voting in the “Foul Four” is now open, and Topher has again asked for World of Walt’s help to pick the menaces who will reach the “Baddest of All Time” finals. To vote for your favorites (or maybe that should be your least favorites?), click here.

The final four represent a who’s who of Disney villainy, led by top-seeded Old School villain Maleficent from Sleeping Beauty. Maleficent handily defeated Cruella de Vil in the quarterfinals with nearly 72% of the vote, advancing to take on the #2 seed, the Evil Queen from Snow White. The Queen was in a tighter battle with #3 Captain Hook, but pulled away late with 62% of votes cast.

The New School semifinal pits #1 Jafar against #3 Scar. Gaston’s muscles were no match for Jafar’s magic, with the vizier getting the nod from over 73% of the voters. Meanwhile, Scar rallied the hyenas to squeak out a narrow upset in the most exciting match of the tournament so far, edging past #2 Ursula by a mere 14 votes at the end.

Semifinal voting is open until August 29, and the finalists will be announced on September 7. To listen to fun, tongue-in-cheek “coverage” of the tournament, check out the latest episodes of Not Your Mother’s Goose.

Is your favorite Disney Villain in the final four?