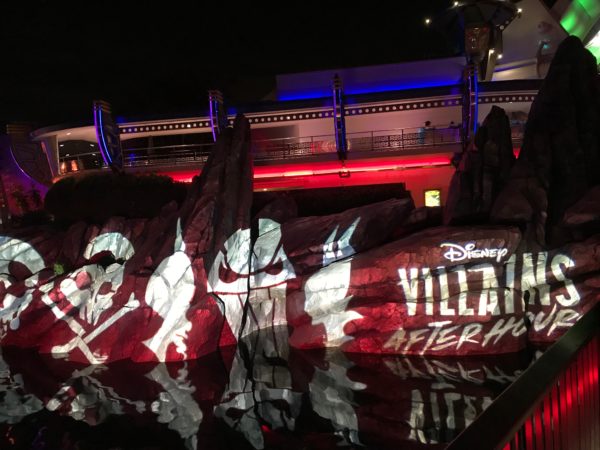 Disney has several hard ticket events, but one of the most unique is the new Villains After Hours event!

Like other hard ticket events, Villains After Hours offers access to Magic Kingdom with limited capacity so wait times are shorter than during regular hours and sometimes even walk-on.  Disney also offers some interesting food, shows, and extras as this event.

I had a chance to experience Villains After Hours on its opening evening of Thursday, June 6, 2019 courtesy of the nice folks at Disney Media Relations.

Let’s take a look at some of the offerings during the Villains After Hours event!

You can get into the park as early as 7 pm.  However, if you have also purchased admission to park during the day, you can wristband – which lets Cast Members know you belong at the event – at distribution centers throughout the park.

The event officially takes place from 10 pm to 1 am.

You can think of the event as a typical “After Hours” event, with very limited crowds and short wait times, plus some extra offerings:  a new castle stage show, special PhotoPass magic shots, additional villain-themed food and beverages for sale, two ride overlays, special lighting, and a procession of Maleficent the fire-breathing dragon.

You can also dress like your favorite character! Even adults are welcome to dress up for this event, so long as they abide by the Disney costume guidelines.

The projected lighting effects were fun, and you could find them all around the park.

During Villains After Hours, guests can experience more than 20 attractions and experiences including Haunted Mansion, Jungle Cruise, Seven Dwarfs Mine Train, and more.

There are special Villain-themed overlays for Pirates Of The Caribbean and Space Mountain.

The Pirates overlay included a live female pirate greeting guests in the queue, plus a live pirate in the ride itself, similar to what you can see at other special events.

As best I could tell, the overlay at Space Mountain was some special villains-themed music.

Disney only offers admission to a limited number of people.  I heard rumors, not confirmed, that there could be as few as 5,000 people at the event.  Since there are typically 60,000 people in this park, and it can hold up to 100,000, this means that you get to experience a nearly empty park.  By about 10 pm, you can walk on to most attractions.

There was a special stage show – Villains Unite the Night during which Hades and Meg from Hercules plus other villains including Jafar, The Queen, Dr. Facilier, and Maleficent come together to rule the universe!

Check out the live video from the show here:

The show itself runs about 20 minutes and includes some interesting acts, plus great special projection effects on the castle and fireworks effects.

It’s worth noting that, while these villains appear on stage, they are not available for meet and greets. Honestly, it’s probably for your own good!

Maleficent in all her steampunk, fire-blowing dragon glory creeps through the park freely for the first time ever! She won’t stop for meet and greets – again, probably for your own good – but you can definitely get some pictures of her!

Throughout the party, guests get complimentary ice cream, popcorn, and select bottled beverages.  I don’t know about you, but I can probably eat my own weight in Mickey Bars when they are served as ‘all you care to eat,’ so this is something really fun about the event!

In addition to the included snacks, there are also special offerings  including desserts, drinks, and dishes inspired by The Queen, Cruella de Vil, Maleficent, Hades, Dr. Facilier, and even Emporer Zurg.

What’s a special event without special souvenirs? Commemorate your night with logo merchandise as well as a variety of items from the Disney Villains Collection.

A very fun and unexpected bonus at the event was the appearance of villains on the Main Street USA train station who said good bye as you left. The evil Tremaine sisters from Cinderella and baddie Gaston from Beauty and the Beast had microphones and interacted with guests, many of whom stayed around for a while to enjoy the fun ad libbed  banter.

Many other villains were on on the train station too, including Cruella De Vil, the Big Bad Wolf, the Queen of Hearts, and the Bowler Hat Guy.

This was a really fun touch and a great way to cap off the evening.

Check out a video of the Tremaine sisters in action:

Villains After Hours will take place on the following dates:

Tickets for all events are on sale now, and they cost $144 plus tax for adults and $139 for children ages 3 to 9. Annual Passholders and Disney Vacation Club members get a $30 discount!

Overall I really enjoyed the events.  Like most hard-ticket Disney events, there is more than you can easily see and do in one visit, but what you do get around to experiencing is a blast.

Interested in the Villains After Hours hard ticket event??