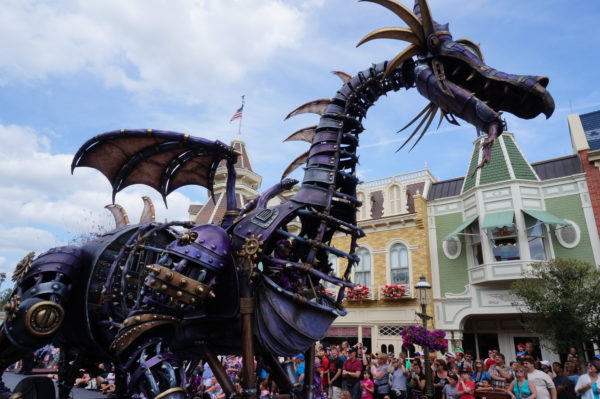 Show your villainous Disney Side this summer at the Villains After Hours event in Magic Kingdom!

Disney’s After Hours events have been pretty successful, and one thing that Disney definitely doesn’t do enough of is to showcase their villains. That’s about to change this summer at the villains take over the night at Magic Kingdom!

Select nights June through August, the Disney villains will host their own special event in Magic Kingdom with a new stage show, villain-inspired enhancements to select attractions, and specially themed food, drinks, and merch!

Let’s take a look at what you can expect this summer at the Villains After Hours event!

Some of your favorite villains will come together on stage for the Villains Unite the Night stage show at the base on Cinderella Castle. Meg and Hades will host, and there will be appearances by Jafar, The Evil Queen, Dr. Facilier and his voodoo friends, and Maleficent.

These villains are quite unpredictable, so this is the only place you’ll see them; Disney doesn’t want anything to go awry during character meet and greets. That would be bad for business!

You will, however, get to see Maleficent in dragon form as her steampunk float creeps through the park throughout the night blowing smoke and flames.

There will be more than 20 attractions open for this special occasion including Haunted Mansion, Jungle Cruise, Seven Dwarfs Mine Train, and more. Rumor has it that Pirates Of The Caribbean and Space Mountain will be getting some villainous enhancements for the event!

As is par for the course for Disney’s ticketed events, there will be themed food and drinks. Expect to see food honoring Cruella de Vil, Hades, Emperor Zurg, and more. Your ticket includes free ice cream, snacks, popcorn, and bottled drinks, but there will be plenty more available for purchase.

Who could forget the souvenirs? Disney will have plenty of logo merchandise available, but you’ll also find some unique villains merch. They’ll be stocking up for these events, so be sure to grab everything you need to pay tribute to your favorite Disney Villain!

This hard ticket event will take place throughout June, July, and August:

Ticket holders can arrive as early as 7 pm, which allows plenty of time to enjoy the fireworks before the general public leaves the park and you head for the attractions!

Magic Kingdom will have limited capacity on party nights.

Tickets will be $139 in advance and $144 on event nights. Annual Passholders and Disney Vacation Club Members get a $30 discount making the advance ticket just $109. Tickets go on sale April 29th.

Oh, and Disney says you can dress up as your favorite villain!