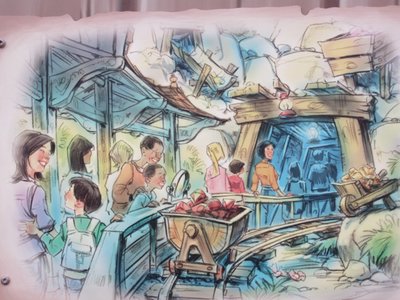 Disney Offers Behind The Scenes Look At Seven Dwarfs Mine Train

The Imagineers at Disney World have been very busy the past few years building out the New Fantasyland. Much of it is open now, including highlights like Enchanted Tales With Belle, Gaston’s Tavern, and the Under The Sea – Journey Of The Little Mermaid.

But there is still a huge construction pit in the middle of Fantasyland. It will eventually be the home to Disney’s latest mountain, the family-friendly roller coaster called the Seven Dwarfs Mine Train.

We looked at concept art a while back, but the project is much more than just a concept at this point. The mountain is taking shape, made with plenty of concrete and steel rebar. Some parts of the structure are getting textured and colored, while others still look very much under construction. You can see many sections of the roller coaster track around the site.

Disney recently released a video with an update on the progress of both the Princess Fairytale Hall (the soon-to-be new meet and greet home for Disney Princesses) as well as the Seven Dwarfs Mine Train.

When Will It Open?

If you have ever overseen a construction project like remodeling a bathroom, you know that it is hard to predict exactly when it will be over. Now multiple the complexity of a project like that by thousands, add in plenty of new technology to debug, and you can understand why Disney doesn’t like to announce dates when attractions will open too far in advance.

However, while there are no solid opening dates set, there are some hints.

When Disney was first working on the Test Track attraction at Epcot, the opening date of the technologically-advanced attraction moved from an originally planned date of May 1997 to an actual opening date of March, 1999 – about a 20 month push. So if you have your heart set on seeing either of these new Fantasyland attractions and want to plan your vacation around it, don’t book your dates until Disney is much more certain about the opening time frames.