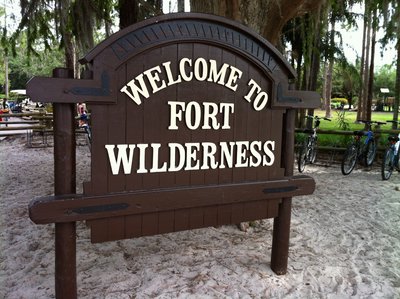 Here are a few activities available at Disney World that most of us have never thought to try, and maybe didn’t know existed!

Walt Disney World has deluxe resorts to spare, but if getting back to basics is your idea of a vacation, consider pitching a tent in the Campsites at Disney’s Fort Wilderness for the duration of your vacation. This extensive stretch of land has tent and RV camping, and enough forest and waterways to make you feel like you are camping in a beautiful state park. The area features swimming holes, walking paths, campfire sing-a-longs, and even horse rides at the Tri-Circle-D Ranch.

On the opposite side of the luxury scale are the rejuvenating spa treatments available at several full-service spas around Disney World. Amid the hustle and bustle of the vacation resort, a spa treatment is a great way to unwind. Disney’s Saratoga Springs Resort has the original spa at the resort, and the eye-catching Walt Disney World Swan & Dolphin Resort features the Balinese themed Mandara Spa. The flagship Disney’s Grand Floridian Resort & Spa has a spa that is currently closed for refurbishment, and will re-open in early 2013.

Typhoon Lagoon water park is a great place to relax and cool off on a hot Florida day, but more ambitious visitors might consider trying their hand at surfing. The 2.75 million gallon wave pool creates perfect waves between three and six feet high, and Disney World instructors are available to teach you the basics of catching waves, standing, and riding on soft-side surf boards. Lessons last approximately 2.5 hours, with 30 minutes spent on land and two hours in the water.

Walt Disney World maintains an extensive fishery in the waters of Bay Lake, and the various waterways that flow around the resort. Eager anglers can cast a line from the shore, or join a guided fishing excursion for access to the best fishing spots by boat. Guided outings leave from many of the Walt Disney World resorts, and generally last between two and four hours. Tackle, bait, and any other fishing equipment is provided by the tour.

Some Walt Disney World vacationers may find themselves in need of a shot of adrenaline after days of riding Dumbo the Flying Elephant. The Walt Disney World Speedway has one the might do the trick, in the form of a real life race car. The Richard Petty Driving Experience allows guests to ride along with a professional driver for a 3-lap qualifying run, or get behind the wheel for 8, 18, or 30 laps with a driving instructor in the passenger seat. If you have a need for speed and an appreciation for the most expensive autos, you can also check out the Exotic Car Driving Experience.

Epcot DiveQuest at The Seas With Nemo & Friends Pavilion gives guest a chance at an amazing underwater adventure. The 5.7 million gallon salt water tank allows SCUBA-certified Disney World visitors the chance to swim with the over 6,000 sea creatures that live in the beautiful reef. But non-SCUBA certified guests don’t need to feel left out – Epcot also has opportunities for snorkeling and swimming with dolphins.