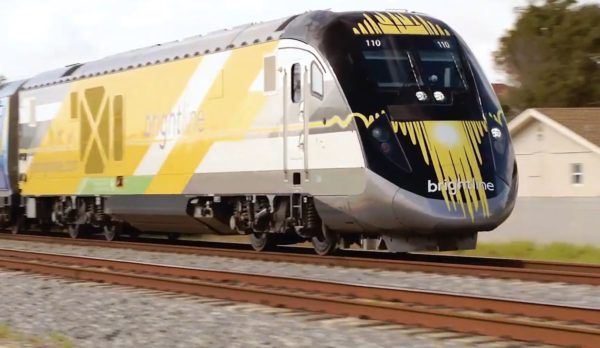 Back in November, Disney announced that Brightline Trains would add a stop at Disney Springs on the high-speed rail line that will eventually connect Miami to Orlando, and then travel on to Tampa.

Now, sources report that Universal wants in on the action.

Construction of the connection from Miami to Orlando is expected to open in the next few years and is well underway.   The 170-mile extension from West Palm Beach to Orlando International Airport, which will cost a reported $2.7 billion, is about halfway done.  Brightline plans to offer service to the general public in 2023.

However, Brightline is still planning the details of the Orlando to Tampa route, which will take several more years to plan and construct.

Organizations such as Universal Orlando, which is building its third theme park – Epic Universe, and the I-Drive business chamber of commerce have or will meet with Brightline to discuss some type of connection with Brightline and the International Drive area.

There are two options for the Brightline’s Orlando to Tampa route.  One goes along State Road 417 that directly connects the Orlando airport to Disney Springs (and skips Universal, the Orlando Convention Center, and International Drive).  A second and more expensive route follows State Road 528 (and could include Universal and nearby areas).

It seems the option to go directly to Disney and bypass Universal is about $1 billion cheaper since Disney is directly on the way from the Orlando airport to Tampa.  Adding a stop at Universal will require a longer route to the north.

The CEO of Universal Parks said he will hard to be included on Brightline.

Should Brightline Trains add a Universal stop in addition to a Disney stop?