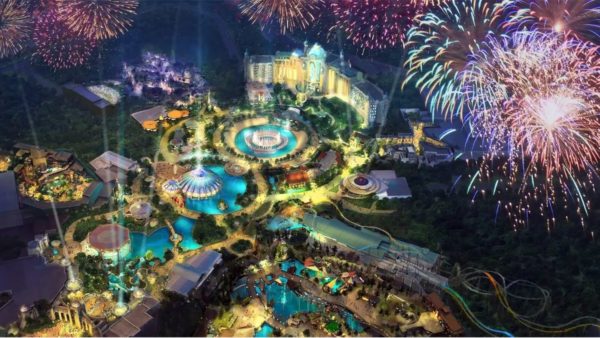 Here at World of Walt, we focus mostly on Disney news.  That said, Disney does not operate in a bubble, and it often reacts to developments that happen around it.

Developments, for example, such as a brand new theme park being built just up the road from Walt Disney World.

The Universal Resort announced that it was going to build a third theme park, called Epic Universe, back in summer 2019.  The new park will be located just south of Universal’s current parks, east of the I4 highway and west of the Florida Turnpike.

Then, COVID-19 hit, and Universal put the construction of the new project on hold.

Now, it seems the project is resuming.

President Biden has announced that there could be enough vaccine supply in the US to cover all adults by May, bringing hope that the travel industry – and theme parks specifically – could start to rebound soon.

Brian Roberts, the CEO of Comcast (the parent company of Universal) announced at an investor conference that the company planned to resume the construction of Epic Universe quickly.  Roberts said the attractions business has “nowhere to go but up.”

…[the restart is happening] immediately but is expected to take several months before reaching full-speed as Universal re-staffs for the project and reassembles its vendor and contractor teams.”

Restarting Epic Universe will result in hundreds of jobs within Universal and thousands of jobs across Central Florida. These positions include highly skilled professional positions, all levels of construction jobs and beyond…

According to sources, Tom Williams, the President of Universal Parks & Resorts, sent a letter out to its employees today:

I hope you and your families are healthy and well. Because of your great work, we already have much to look forward to this year. There is Super Nintendo World at Universal Studios Japan, the Jurassic World: Velocicoaster at Universal Orlando, the opening of Universal Beijing Resort – and the opportunity to reopen Universal Studios Hollywood.

Today, I’m happy to share that we’re resuming work on our new Orlando theme park, Universal’s Epic Universe. As you know, the project had been paused while we focused on managing our business through the pandemic. The restart will begin immediately – but will take several months before reaching full-speed as we re-staff and reassemble our vendor and contractor teams.

The vision for Epic Universe is historic. It will be the most immersive and innovative theme park we have ever created and will feature a new theme park, an entertainment center, hotels, shops and restaurants. It will be located on a separate 750-acre site just a few minutes away from Universal Orlando.

All of this is great news for our business, our communities – and each of you. And none of it would be possible without the heroic and great work you have done over the past year. Because of you, our confidence in the future has never been stronger.  Thank you, and please stay safe.

The resumption of the Epic Universe project couldn’t come at a better time… Our community has so many talented workers who will benefit from this massive project. I am confident it will deliver a huge economic boost to Orange County.

Will Universal’s resumed construction on a third park force Disney to respond?