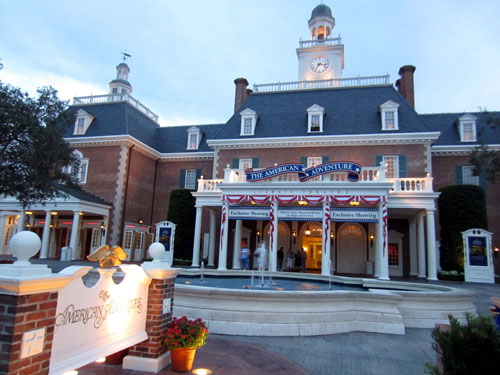 Walt Disney was perhaps as American as anyone can be. He was so dedicated to his country that he tried to join the military at just seventeen years old. When Walt became successful in the cartoon and film industry and then the theme park industry, he wanted to carry the theme of Americana throughout his films and parks.

After Walt’s passing, his Imagineers wanted his legacy to endure, so they continued to place hints of patriotism throughout the parks, and it’s an underlying concept of many attractions.

Let’s take a look at the top eleven attractions in Disney World that are uniquely American.

Dinosaur in Disney’s Animal Kingdom introduces guests to a scientist who disobeys his boss and puts tourists in potential danger to save a dinosaur from extinction. What could be more American than blatant disobedience and a proclamation of individuality for its own sake? I can’t think of anything!

Jim Henson is an American Icon who helped shape American comedy as we know it today. I’ve never met anyone who doesn’t like the Muppets, and Muppet Vision 3D in Disney’s Hollywood Studios brings together the best of the puppeteer show and American satire.  It’s a salute to all nations, but mostly America!

Mission: Space in Epcot‘s Future World is truly American. We were the first in space and we’ve pioneered space exploration. Mission: Space takes guests on a wild ride through space as you have to participate in a mission by pressing your button at the appropriate time.

Yes, it talks about work at the International Space Training Center (ISTC), but you know that the US must be footing most of the bill!

NASA Astronauts who helped create this attraction have said that it is as close to a real space launch as the average person could get. Now that’s American!

Twilight Zone Tower of Terror may not sound specifically American, but what is American is a Sci-fi channel marathon of the shows – or really any scary show marathon for that matter.

Tower of Terror in Disney’s Hollywood Studios also pays tribute to the Hollywood Tower Hotel, which welcomed some of America’s greatest stars from Hollywood’s heyday. The story here is when, on one fateful Halloween night, the elevator dropped and everyone aboard disappeared. Now you get to take a ride on a similar elevator and experience the Twilight Zone!

7. Living with the Land

There’s nothing particularly American about gardening since it’s probably some of the oldest work one could do, but there is something very American about not only growing food for your family and thousands of your closest friends but also having a vision about how to improve a centuries-old staple.

Scientists in The Land work with NASA and the US Department of Agriculture to develop new and sustainable ways to grow the food we need in the most efficient and effective way possible. The Land experiments with all kinds of growing techniques including hydroponic gardening and hanging gardens.

Plus, Living with the Land also pays homage Walt’s original vision of EPCOT as a community of tomorrow taking advantage of the latest technological advances for all necessities of living. Not only classically American, but classically Disney and classically Walt, it doesn’t get any better than that.

The Carousel of Progress in Magic Kingdom‘s Tomorrowland may not be the best representation of tomorrow, but it was one of Walt’s creations and it showcases the American family.

The song “A Great Big Beautiful Tomorrow” speaks to the optimist in all of us with its promise of a better tomorrow. The show itself depicts the evolution of society and the innovations of past generations. The best part is that it deals with real American people not astronauts or presidents or movie stars.

Illuminations Reflections of Earth shows nightly on Epcot’s World Showcase Lagoon. While the focus is on all humanity rather than just Americans, the message of progress and determination is profoundly American.

Fireworks also may not be uniquely American, but lighting stuff on fire and shooting lasers into the sky in a spectacular display of the power of humanity is about as American as it can get.

The Muppets make it onto the list again!  Presented in Liberty Square, the show features ultra-patriotic Sam Eagle.  Sam is flustered (as usual) at the Muppet madness that naturally happens when the gang reviews key moments in American history.  If you haven’t see this show yet, be sure to check it out.

Hall of Presidents in Magic Kingdom’s Liberty Square also gives a nod to Walt and his World’s Fair exhibits. Mr. Lincoln, which was his first fully functional audio-animatronic, debuted at the World’s Fair and delighted guests so much so that he became the center of an entire attraction known as the Hall of Presidents.

This wonderful attraction is often underrated, and people tend to skip over it but that’s a mistake. The video footage was recently redone, and Morgan Freeman now does the narration. The audio-animatronic presidents tell the story of America and inspire confidence in the representative nature of our government, which is something that is sorely needed these days.

Start by looking around the Heritage Gallery while you’re waiting for Voices of Liberty to start. Don’t miss this singing group that performs classic American songs and encourages the audience to participate. Finish off with the show, which is a part you don’t want to miss!

Main Street USA is my top American attraction in Disney World. Walt and then his brother Roy carefully planned Main Street to represent Smalltown America. They hoped that every guest who walked down the bricked streets would reminisce about their childhood and “the good old days” whether they actually grew up in a small town, a big city, or the suburbs.

Every detail from lowering the height of the window fronts so little kids could look inside to the business names on the windows of the second floor was painstakingly laid out. Guests can visit the bakery, the hat shop, the emporium, an Americana hot dog joint (Casey’s Corner), and an ice cream shop. It really doesn’t get more classically American than Main Street USA.