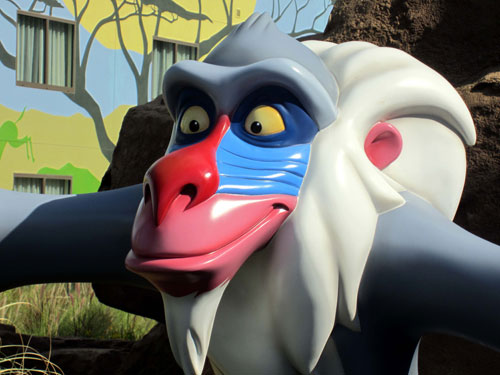 Disney owns and operates a whopping 26 resorts in Walt Disney World. A stay at these resorts offers all of the Disney amenities including delicious food, themed pools, clean rooms, and easy access to the Walt Disney World theme parks, water parks, and entertainment districts.

Disney Resort Hotel guests also have free transportation to and from the resort hotels via Disney’s Magical Express and between the parks via bus, monorail, and ferry boats plus Extra Magic Hours every day.

While all Disney resort hotels are fun, there are some that are more unique than others. Let’s take a look at ten of Disney World’s most unique hotels.

Disney’s Art of Animation Resort is a value resort making it the most affordable hotel on the list. It’s great for budget conscious visitors and those traveling with larger families or multiple generations because there are family suites on property that are larger than standard rooms and include a kitchenette in the room but cost much less than a similar room at a deluxe resort. It’s also the newest resort on property, so it’s pretty up to date.

What makes this hotel unique is the theming. There are larger than life structures of your favorite Disney movie characters including Finding Nemo, Cars, Lion King, Little Mermaid, and more. Kids love them, and they make great photo backdrops.

Animal Kingdom Lodge puts guests as close as ever to the animals in this horseshoe-shaped hotel overlooking a 46-acre savanna. The rooms are uniquely appointed as well with African artwork adorning the walls. When you get hungry, you can dine at one of The Lodge’s award-winning restaurants: Boma, Jiko, and Sanaa.

What’s really nice is you don’t have to be a guest at this hotel to enjoy the savanna. Just take a bus to the resort, and take a leisurely stroll around the resort. This is true for any Disney Resort Hotel as long as you’re staying at a Disney Resort.

Disney’s Contemporary Resort Hotel is a 14-story deluxe resort hotel with a modern and luxurious feel. What’s really cool about this hotel is not only that it’s a monorail stop but that the monorail runs right through the center of the main hotel!

Not only is this hotel an Imagineering feat, it is also home to some of the best dining on property. Chef Mickey has a fun and delicious character dining, and California Grill is known for its West Coast vibe. While the food is amazing, the views are to die for! This is perhaps the best view of Happily Ever After, Magic Kingdom‘s nightly fireworks show, outside of the park.

Disney’s Grand Floridian Resort and Spa lands you right in the middle of quintessential Victorian Era Florida. Disney World’s flagship hotel has the fanciest dining on property at Victoria and Albert’s plus character dining tea parties for the little ones.

The Grand is also home to the wedding pavilion and Disney’s wedding planning store. If you’re a bride or groom and you want to get married in Disney, this hotel is a dream come true!

Disney’s Yacht Club Resort has a New England nautical theme and Disney’s Beach Club Resort is more laid back with a beach cottage feel. While these are technically two separate resorts, one important and unique feature joins them: Stormalong Bay. Stormalong Bay is a water park in itself with a lazy river, water slides, and a pirate ship all for your exploring pleasure. So, if you want to save money on water park tickets but still enjoy some features, this is the place to be.

The resorts also have some fun dining at the Yachtsman Steakhouse and an old-fashioned ice cream parlor. They are also a short walk from Epcot‘s International Gateway, which leads right into World Showcase. If you’d like to hang back at the resort but still enjoy IllumiNations, you’ll have an excellent view from either resort.

Disney’s Boardwalk Inn is an Atlantic City-themed deluxe resort hotel. Like the Yacht and Beach Club, the Boardwalk Inn is a short walk from Epcot providing good views of Epcot’s fireworks show and convenient access to World Showcase. The Boardwalk Inn also has some of the best Italian and Seafood on property with Trattoria al Forno and Flying Fish, which was recently remodeled so the atmosphere better fits the upscale menu.

What really sets this hotel apart though is its access to The Boardwalk, which is family friendly during the day and becomes an adult’s playground by night. Jelly Rolls is a dueling piano bar and Atlantic Dance Hall is a nightclub playing the hits of the 80s, 90s, and today. If you’re taking an adults-only vacation or the kids are old enough to stay in the room by themselves, you won’t want to miss this fun-filled area.

Disney’s Saratoga Springs Resort is themed after Victorian Era New York with cottages and horseracing photos around the resort. It is also one of the only Disney Resorts with a full-service spa on property, and it’s very close to Disney Springs and Lake Buena Vista golf course. If you want a relaxing Disney Vacation, this is the place you’ll want to stay.

Saratoga Springs is one of the Disney Vacation Club resorts on property, so the amenities are better than even other deluxe resorts. There are studio, one-, two-, and three-bedroom villas at the hotel, and guests can purchase groceries in the main lobby’s store regardless of their room.

Disney’s Wilderness Lodge is reminiscent of Old Faithful Lodge in Yellowstone National Park. With restaurants like Artist’s Point and Whispering Canyon Café, you certainly won’t go hungry. Oh, and I should mention that if you like ketchup, you’ll definitely want to visit Whispering Canyon.

When you enter the Lodge, you’ll notice hot springs running right through the main lobby. If you follow the hot springs, you’ll find that they lead to the swimming pool in the form of a waterfall. An even more unique water feature is the geyser that erupts hourly.

While Disney’s Treehouse Villas are technically a part of Saratoga Springs Resort; I’m giving them their own section because they’re that special. These three-bedroom treehouses have an open floor plan with a kitchen and two baths. Up to nine adults can sleep here making them excellent for a large group of friends or a big family who wants to stay together. Each treehouse has a private driveway, deck, and a charcoal grill and is surround by lush forest. They are so secluded that you won’t even realize there are neighbors within walking distance. You won’t be too far off the beaten path though. Disney Springs and the pools and restaurants of Saratoga Springs are a short walk away.

These Treehouse Villas are perfect if you want a truly unique resort experience!

Disney’s Polynesian Village Resort just received a huge makeover. While it was one of the original Disney Resort Hotels and the third stop on the monorail, The Poly recently became part of the Disney Vacation Club. This project renovated existing standard rooms to make them DVC friendly and added over-the-water bungalows atop the Seven Seas Lagoon. These bungalows are pretty pricey, but they’re on par with the Treehouse Villas in uniqueness.

This South Pacific hotel has many other special experiences including the Spirit of Aloha Dinner Show, a nightly torch lighting ceremony, and an awesome volcano pool. Cast Members will also give you Hawaiian Leis upon arrival and just about anywhere you go at the resort. Take as many as you can get. They make great (free) souvenirs!

Disney’s Polynesian Village is also situated on Seven Seas Lagoon across from Magic Kingdom with Disney’s Grand Floridian to the left. The beach between The Poly and The Grand is one of my favorite places to watch Happily Ever After. It’s also a perfect location for catching a glimpse of the Electric Water Pageant.

Which Disney Hotel do you think is the most unique?