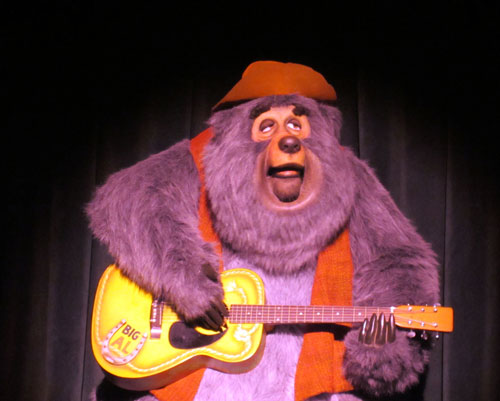 When it comes to attractions, certain headliners seem to get all the love. You can always count on astronomical standby wait times for Soarin’ at Epcot and at Toy Story Mania at Disney’s Hollywood Studios. The mountains (Space, Splash, and Big Thunder) usually have long lines too when you are in the Magic Kingdom.

All these superstar attraction deserve their reputation for being stellar. After all, they are stellar. Some folks could rightly label them as iconic.

That doesn’t mean that we should overlook other attractions around Disney World. Disney has some great attractions that are too often overlooked and underrated. They are really great experiences, but for some reason they don’t much attention. It’s a shame. These overrated attractions are fun, quality experiences that usually have short lines.

Even if you aren’t into corny jokes and country music, you should definitely check out the Country Bear Jamboree. Disney shortened the show to accommodate the shorter attention spans of guests but left in all the fun including the wonderful and politically incorrect “Mama, Don’t Whip Little Buford”; I love that part of the show! The show is in excellent shape and has plenty of nostalgia for Disney fans – especially those who can’t manage to forget Disney’s Country Bears movie.

Amazing technology, audience participation, and lots of laughs. What’s not to love about the Monster’s Laugh Floor in Tomorrowland? This show uses plenty of great technology including receiving guest jokes via text message and showing animated Monsters Inc. characters that talk to and interact with the audience. Since many of the jokes change with each show, depending on audience submissions, you can visit time and time again and get a different experience each time. Yes, the characters do pick on a few audience members, but it is all in good fun.

The World Showcase section of Epcot is filled with lots of films giving you an overview of their host countries. Impressions de France, the film in the France pavilion, is arguably one of the best. The imagery of France is breathtaking, and the musical score sets your heart soaring (really!). Disney upgraded this show a while back to use digital projection technology so the images are clear and crisp. Unlike some other films that haven’t aged well, like the one in Norway, this movie still looks great, save for just a few shots of people who have strange hairdos.

Yes, we haven’t seen many updates to The Great Movie Ride, save for a few change to the movie montage way back in 2005. Yes, you already saw the Great Movie Ride when it was one of the few things to actually do in the young Disney-MGM Studios theme park, and yes, some of the films featured in the attraction are so old that younger guests have no clue as to what they are about, but that doesn’t mean that The Great Movie Ride doesn’t deserve some love. This attraction is all about the best movies of all time, not just the current ones (which, honestly, may not stand the test of time). It is, in part, about the golden age of Hollywood that was creating new genres for exploration with the art of film. It contains a great mix of film history, audioanimatroic technology, and live acting to create a fun experience that is worth revisiting.

Far more than the boring museum many guests expect, One Man’s Dream is a wonderful way to explore the depth of Disney history that just isn’t possible elsewhere. You can see artifacts that helped to mold the entertainment industry as we know it, a few quick previews of what is to come near the end of the attraction, and you can learn a lot about Walt Disney, the man, in a movie that will uplift and inspire everyone from the casual guest to the Disney diehard.

I’m going to cheat just a little bit here and name an entire land as underrated at Disney’s Animal Kingdom. I know that many folks, quite simply, hate Chester and Hester’s Dinorama. They see it as a tacky and cheap area that doesn’t deserve to live on Disney property. I think that is mostly because they don’t know the true story behind this section of the park. Take a few minutes, do yourself a favor, and check out this article titled “In Defense Of Chester & Hester’s Dino-Rama in Dinoland USA.” You will learn some interesting backstory and, I guarantee, have a new appreciation of Chester and Hester. You still might not love it, but at least you will be able to appreciate it a bit more.

What do you think are the most underrated attractions at Disney World?
Leave your comments below?