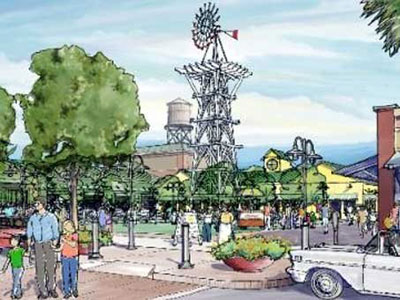 Way back in November, 2007, Disney made a big announcement about Flamingo Crossings. Do you remember that? It was a 450-acre district on Disney property that was to include shopping and hotels. The area is at the intersection of State Road 429 (a relatively new and lightly used toll road that runs along the western edge of Disney property) and a road called Western Way.

The development was supposed to include up to 5,000 lower-priced hotel rooms as well as up to 500,000 feet of new retail space.

However, before all these plans could come to pass, the great financial crisis of 2008 hit. Many of Disney’s partners in the project were no longer able to arrange for financing for all the new buildings.

Even though the project nearly ground to a halt, Disney still went ahead with preparing the land. They cleared away trees and put in utilities and roads. Even today, one can see roads, landscaping, and street signs, but no buildings. The area is ready to go, but is undeveloped.

That may be about to change.

The paperwork included an application for two new Marriott-branded hotels in Disney’s Flamingo Crossings. These include a Townplace Suites and a Springhill Suites. According to the plans, the two hotels will share a pool and gym, but will have separate lobbies.

While these hotels are on property that Disney is developing, they will almost certainly be classified as “off-site hotels” (much like those in the Disney Springs area), so they likely will not participate in perks for Disney resorts like Extra Magic Hours, Disney transportation, and Disney’s Magical Express.

Construction should start later this year.

Are you excited about new hotels on Disney property?