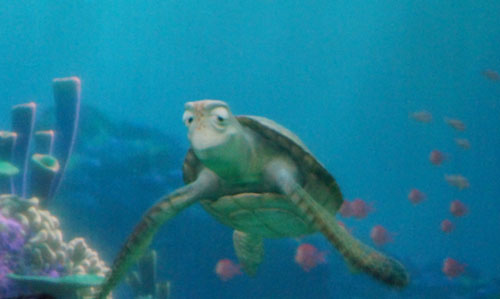 Turtle Talk with Crush (With Video)

Since it first appeared on November 16, 2004 in The Seas With Nemo And Friends Pavilion in Epcot’s Future World, Turtle Talk with Crush has been amazing Disney World guests young and old alike with an opportunity to interact with a turtle.

When you enter the theater, you see a huge window (actually a giant rear-projection screen) that appears to be looking out into the water. Occasional fish swim by, and the light filters down. The Cast Member encourages little kids to sit in the front where they will have a better view and an opportunity to interact with Crush the turtle.

Crush, from the Disney Pixar film Finding Nemo, shows up and talks a bit about life in the turtle world. He then selects children who can ask him questions. Crush interacts with the children holding a real-time conversation.

The amazing thing about this show is that it is completely seamless;  you see Crush, interact with him, and he responds with anything from doing a flip to raising his eyebrow. The technology that runs the show disappears because it is done so well.  You might not even think about the technology.

But that doesn’t mean that the technology isn’t impressive.

The on-screen version of Crush is controlled by a backstage puppeteer whose instructions are converted real-time onto the screen.  It’s all rendered at 60 frames per second.

Sources say that the voice isn’t synthesized, but rather the actual voice of the backstage puppeteer who is selected through an audition process. The actor must be able to replicate the voice of Andrew Stanton, who was the voice of Crush in the movie Finding Nemo as well as the voice behind many other characters in Pixar films.

The technology is reportedly built on a modified Playstation controller that runs with custom software.

When you add up the questions of children, the talents of a puppeteer, improvisation, and technology, the result is an amazing and entertaining show that makes 10 – 15 minutes fly by.

Other Uses of the Technology

You can also visit the Turtle Talk attraction at Disney’s California Adventure and Tokyo DisneySea. It also made a brief appearance for about four months in 2008 at Hong Kong Disneyland.

Disney uses similar technology in the “Animator’s Palate” restaurant on the Disney Dream cruise ship and in the Monsters Inc. Laugh Floor attraction in Tomorrowland in the Magic Kingdom.